Now how do I know that? 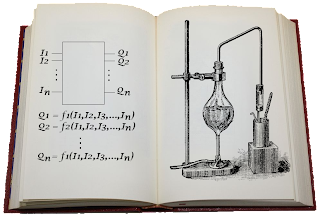 On occasion it would be very convenient if human beings could read minds,
perhaps when interrogating crime suspects or when waiting for the moment to ask a girl out on a date. On balance, however, it's probably a good thing that they can't. Aside from laying bare all our deepest hopes and the ideas we'd never speak aloud, it would completely devastate a good game of chess.  Ah well, such is fantasy. As fantasy, it cannot serve as a neat little answer to a more fundamental question: how do we know things?

Some things, of course, we know because our senses tell us. We feel a switch flick beneath our fingers and see the room be bathed in light. While philosophers argue about the trustworthiness of our senses, broadly speaking we all agree that they're normally reliable.

That said, there are some things that we know even though our senses cannot tell us.
For example, I cannot taste that no fact and its opposite can be simultaneously true. I cannot smell that two premises related in such and such a way must lead to a given conclusion. These are are the basic building blocks of logic, not derived from aroma or any other sensation, but from their own necessity.

A third category of knowledge pertains to the internal state of our minds. I am aware that the light is on because my eyes detect the photons streaming from the bulb. However, how do I know that I'm aware of that fact? This knowledge is information I have privileged access to, being rather close friends with my brain. Other information in this category might be the knowledge of how much I love someone or what I intend to do about it. (the obvious thing: I'm off to Oz to see a man about some courage)

Finally, I have information of a form that my senses could have had access to were circumstances different, but circumstances weren't feeling so kindly. It is possible that the entire population of Japan could line up in front of me so I could see them and count them, but instead I've resorted to asking Google. Apparently there are about 128 million of them, so counting could have taken me rather a long time.
This is roughly how I find out most of my facts about the world; whether through blog posts, books, letters, hand signals, or plain old talking, information is transferred from another sentient brain into my own.

There is a rather peculiar tendency these days to suggest that the only really reliable source of information is science. In essence, that means taking in information through our senses (such as touching the hot plate) or setting up a known chain of equipment which gives output for our senses (such as pressing a thermometer against a hot plate). If we're sufficiently rigorous and carefully set up repeat experiments, that can provide an amazing amount of very reliable information. No reasonable human being would be anti-science.

However, three of the four kinds of information I mentioned above are completely inaccessible to our senses. One might protest that advances in technology such as PET scans may some day offer access to the "internal state" form of knowledge, but even that cannot be demonstrated to be reliable unless the subject tells you what he was thinking during the scan. Although nearly everyone accepts information from the scientific method, the most reasonable would not refuse information from other methods. To do so would be to constrain ourselves to a tiny subset of available information: that which we can directly observe ourselves.

There are whole branches of inquiry that depend primarily on the other three. Logic and Mathematics emphasize formal proof from basic principles, not repeated controlled experiment. Every kind of Aesthetics, the study of art and beauty, is not so concerned about the molecules of paint themselves but the pattern they project onto the internal canvas of our minds. History emphasizes transferred knowledge from another mind; a historian's task is to evaluate the reliability of writers who were contemporaries to the events studied, and piece together facts about times that they couldn't observe themselves.
Most disciplines mix them together, and even the traditional hard sciences would fail without the support of logic, maths, and information transferred via other scientists.

A lot of people present "Faith" as believing something without or even in spite of the evidence. In support they'll cite Hebrews 11:1, "Now faith is confidence in what we hope for and assurance about what we do not see."
If you subscribe to Scientism, that is pretty accurate. Having faith is daring to believe something even though you, personally, have not put it under a microscope and stared at it, normally believing with assurance from somebody else. If only empirical information through your own eyes or nose can be trusted, faith is lunacy.
Of course, that includes the faith shown by historians and the faith shown by scientists as much as the faith shown by the religious.

There is a saner way. The testimony of a witness is evidence. It isn't conclusive proof: witnesses can lie, witnesses can be mistaken, witness testimonies can lead to the wrong conclusion, but generally their words are supporting evidence. That means, if you read through a scientific research paper, you do not have to discard every citation in the bibliography to other peer-reviewed studies as groundless faith. You do not have to discard the paper itself as meaningful only to the small team who performed the experiment. You can accept what they say, of course taking care to evaluate it and keeping an eye out for hints of bias. At the same time you must accept that, by and large, the religious believe based not on blind faith but on faith nonetheless, and that doesn't make them irrational or idiots.
Posted by Josiah at 01:36