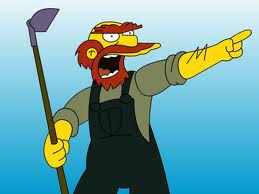 I used to be an atheist. That doesn't necessarily mean I was a Hitchens/Dawkins (insert other religion despiser) style atheist, in fact I wasn't anti-religious at all. Yes perhaps I thought it was all a little silly but to be honest it was more out of ignorance than disdain for the religious. Coming from a single-parent, dysfunctional  and working class household I wasn't particularly well read and needless to say I did pretty bad at school, not because I was stupid but because I was lazy and was never really encouraged to see any value in education and learning. However, I considered myself an atheist because I didn't believe a God or gods existed nor did I believe in the supernatural which seems consistent with atheism. I have always been naturally sceptical and atheism just seemed rather normal to me. Although I never thought about it at the time (because I'd never heard of hedonism), I used my atheism to justify my hedonistic lifestyle because it just seemed okay because that's what everyone else in my friendship group was doing. Of course I'm not saying atheism necessarily leads to hedonism but it could just as much as it could lead to humanism.

Yet in the seven years I've been a Christian I can't count the number of times I have been accused of lying, since I couldn't really have been an atheist. I'm constantly struck by the arrogance of some atheists who seem to know better than I do about what I have or haven't believed in the past, rather than accept that people can move from atheism to theism. How dare people accuse me of not knowing what I didn't believe in. One does not have to be a middle-class, Nietzsche read, university educated, Starbucks sipping humanist to be an atheist, one simply needs to have the absence of belief in the gods and the supernatural! There is no atheist disclaimer that states only those that know the Origin of the Species from back to front or those that saw the light after reading The God Delusion are allowed to call themselves atheists. Perhaps it's that it's only some of the arrogant atheists (and atheist celebrities) on Twitter that define themselves by their lack of belief in the gods that feel justified in accusing those less read than themselves as worthy of calling themselves atheists. There is no qualifier for atheism other than that one doesn't believe in the gods or the supernatural, there are no books to read or prophets to obey, just the ones you choose. I'm quite justified in referring to myself as a former atheist whether atheists like that or not and in fact the more atheist literature I read the more I think I'm justified in my decision.

What this amounts to is a variation of the no true Scotsman fallacy whereby anyone who once considered themselves an atheist but has changed their minds couldn't have been a real atheist. This is because from their perspective anyone that once called themselves an atheist should never become a theist, so you therefore must have been pretending, not properly understood atheism (there's not really much to misunderstand) or just using the story for some ends. This is all very strange since many (not all) atheists view themselves as being the champions of reason and logic yet fail to see the problem of their own erroneous reasoning which I demonstrate below.

I suppose all I really want to say is that if you are an atheist please don't keep accusing ex/former atheists of not really being atheists to begin with. Firstly, it makes you look silly and arrogant and secondly, I'm afraid you better get used to it because I think a number of people are starting to see that ultimately atheism does not stand up to scrutiny. As a Christian I have to constantly hear about all the Christian de-conversion stories going around which I read and try and learn from so perhaps extend the same respect to former atheists rather than pretending we don't exist. Thanks.
Posted by failedatheist at 04:57