My morning at the 'The Sunday Assembly' aka the Atheist Church

So this morning I took the trip up to Holborn to visit the Sunday Assembly with a few other Christian friends, this was mainly because I wanted to find out what it was like for myself after reading about it in the papers. The Sunday Assembly are a savvy and friendly group of people who clearly have a number of skilled people at their disposal, this may explain the spawning of what is really now a global movement of godless 'churches'. There are now Sunday Assembly's in Nashville Tennessee in the heart of the US Bible belt, with several more all over the UK, US and Australia (forty in total I believe). All this in just a year, statistics that any church planting group would probably have to describe as miraculous! 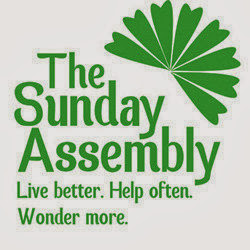 If I'm honest I thought it would be full of single weird men who love to tell Christians how deluded they are on twitter. But I was rather shocked that there were people from all age groups and quite a few young families. Not what I was expecting.

So what did I think? I had been looking forward to going to the Sunday Assembly since we first arranged going and I wasn't disappointed, I enjoyed it basically because it was fun. When we were singing and dancing I felt like I was at a kinda weird wedding, the sort where I was having fun but I wasn't quite sure what I was celebrating. I suppose that's what alot of Christians have been critical of, after-all what are they celebrating and why are they so happy?


My observation was that as human beings we are relational beings, that is to say we generally flourish best in a community of shared beliefs and values. So on a prima facie level the Sunday Assembly is simply another expression of that human need and desire to be around other people who are like us. It's why many people go to football each week, to spend time with like-minded people who share the same interests and passion for their team combined with the lifting up of hands in a worship like fashion. It's difficult to look at the human race and not come away with the idea that we aren't innately disposed to worship which is what has led the human race to be referred to as 'Homo religiosus'. I suppose Blaise Pascal and CS Lewis would have something to say about that. Is the Sunday Assembly just another expression of our innate human religiosity?

I spoke to a few people while I was there and it was nice to hear that there are a number of people there who are not just atheists, agnostics and secular humanists but Christians and those with other beliefs. So in some sense I suppose it's not really accurate to call it the 'atheist church' even if most people there may in fact be secular humanists. I can now say with experience that it was a very friendly environment, they certainly have the church seeker friendly model well honed with tea and biscuits to finish and even a bookshop. Secular humanism really is the friendly face of the new atheism.

But even though I enjoyed it, it was still a little strange, the service was clearly modelled on a contemporary style Christian worship service and that wasn't where the similarities ended. There was charismatic leadership led from the front by the charming and friendly comedians Sanderson Jones and Pippa Evans, a very good band with a mix of ages (which is nice to see), a talk (about the worlds first underwater tunnel) some lively fun singing (we sang Journey and Gloria Gaynor), moments of silent contemplation and they even have midweek groups for encouragement and accountability! So it is a little strange. So in some sense it literally was a church service minus any mention of God.

But even with all the similarities it still felt more like I was at a comedy club than anything else. One thing I noticed was that there was a particular emphasis on humour, everything was meant to be funny from beginning to end which I couldn't help but think was a way of deflecting genuine engagement with life's struggles and problems. But that might not necessarily be the case. Of course I think laughing about things can be helpful but there were parts that weren't that funny and I felt I was a bit stupid for not chuckling with laughter, it reminded me at times of the whipping up of the charismaniacs at the local Pentecostal Church. Which might not be a bad thing, I mean I'm a bit of a charismatic myself on my better days. I suppose I just wonder what it would be like without all the humour and pop songs, but we won't know whether it's just another passing fad or something with any longevity for quite some time yet.

Would I go again? There are two levels to that question, on one level I would go because it was fun and the talks more often than not are quite interesting. But on another level it still felt shallow and lacking something, perhaps it was the mimicking of a Christian youth service or the absence of the transcendent. It just seemed like the humanist attempt to fill that God shaped hole, but certainly a fun attempt! Rather than being critical Christians should see it as an opportunity for engagement and discussion even if we may fundamentally disagree about the answers to life's big questions, of which we clearly do. But there are certainly many matters of agreement in terms of shared values and what we believe will best serve the common good of our society.

Some Christians will still be thinking to themselves whether you can be good without God, the answer is sort of. Many non-Christians live great lives whilst many Christians live horribly lives but it is only the gospel that is able to transform a selfish and nasty piece of work into someone who's whole being has been reorientated to love in regards to self, other and God. From a Christian perspective no-one is justified by what they do or how good they think they are compared to their neighbour. Instead God makes us right because of what Jesus has done on our behalf on the cross and is not something we can earn through good works and being nice.

I'll definitely be stopping by again at some point and thanks to The Sunday Assembly for being so welcoming.
Posted by failedatheist at 13:22