In a recent undercover operation two doctors were discovered to be offering such services and with more than enough evidence to prosecute them for breaking the law the Crown Prosecution Service (CPS) decided not to prosecute them. The reason given was that their prosecution was not in the public interest. Surely prosecuting those who break our countries laws is in the public's interest? I'm sure the CPS would agree that doctors who offered to smother newborn girls for the parents would be in the public's interest. What this demonstrates is that the CPS have made what is in truth a logical connection between our societies disregard for the unborn, they know that in reality given some thought gender-selective abortions differ little morally from any other type of abortion. Both intend to kill and result in the death of the most vulnerable members of the human community. 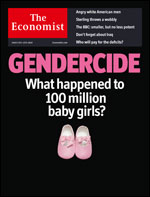 I've written enough on why abortion is a barbaric and immoral act before, however the issue of gender selective abortion I was hoping would encourage us as a society to question the very nature of abortion and the unborn. If the unborn are not human beings with any or little moral value then I don't really see that there's much of a problem with gender-selective abortions. After-all if they aren't persons with any moral value and the parents don't want them the reason is really of little importance and I wish more people would be honest and consistent about this.

Mary Anne Warren famously argued that abortion could be justified if a women didn't want to cancel a planned vacation, if that is the case then doing so based purely on the basis of gender would appear justified. For instance if one is in a society where men are more able to work and earn more money for the family then it makes economical sense to get rid of the female human fetus for a small fee and hope that next time it is a boy. Or perhaps a family already has three girls and they desperately want a son to pass on the family name, this could also provide a reason for procuring a gender selective abortion. However all such reasons beg the question and assume something about unborn human beings, that they are either not morally valuable persons or that they are moral persons but a women's choice trumps the unborn right to life.


It has been estimated that there are well over one hundred million missing women in the world (mostly due to gender-selective abortions and infanticide) and this was estimated in the early 1990's. For a society that talks about promoting the empowerment and rights of women to not prosecute these doctors only sends out the message that unborn human beings are of even less value and that killing them will be tolerated and justified for any reason. However, when the law is already interpreted very loosely already I suppose we really shouldn't be surprised.

The hypocrisy of our culture is palpable, if it were possible to know the sexual preference of the human fetus I doubt many would justify the killing of a potentially same-sex attracted human fetus which makes no sense whatsoever. We truely are a morally confused culture and that clearly includes the CPS.
Posted by failedatheist at 03:04