A Minority among Minorities: Christian & Muslim Responses to Criticism

(This is an article I first wrote for What You Think Matters: http://whatyouthinkmatters.org/blog/article/a-minority-among-other-minorities)
A few weeks ago I was invited to an event hosted by the local mosque where the renowned Yusha Evans was to teach the umma (Muslim community) of Brighton and Hove Da’wah. That is, to teach his fellow Muslims how to invite people to Allah. 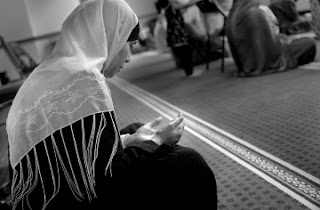 The flurry of excitement within the Muslim community was evidenced by the number of emails I received inviting me, more than once, to talks and training sessions Yusha was to give in Brighton. In addition I was even updated on his tour of the UK, in case I wanted to travel to Cardiff to hear him, which it seems my Muslim friends were intending to do.

I decided to go to one of his talks in Brighton, not only because of his fame, but because Yusha Evans is known for his conversion from Christianity to Islam. I was not at all convinced by his message, and I still strongly believe in the truthfulness of the Bible as opposed to the Qur'an.


But the thing I want to comment on here is one of the leaflets placed on a table near the doorway for women to pick up as they entered (as I was of course in the women’s section of the mosque). One of the three leaflets offered was entitled ‘Brighton & Hove Racial and Religious Harassment Forum’. This caused me to pause.  I was aware that this talk took place in the mosque, rather than the universities, and therefore was more of an ‘in house’ address to Muslims, but still the question of the leaflet played on my mind. The leaflet suggested that the Muslim community feels victimised in the UK.

The leaflet caused me to think more broadly about Christian engagement with society. Considering the fact that we also receive our measure of ‘bad press’ this question is important. I think there are three overarching reactions that can result from public criticism: isolation, anger or engagement.

Isolation from the main stream secular culture can be as automatic a reaction as osmosis unless one guards against it. It can even innocently be the consequence of passivity. This isolation is not always ‘complete’, but can be demonstrated in certain attitudes. For example, a Christian might be happy to work and socialise with non-Christians, but will shy away from talking about his/her faith.

Anger can be a natural reaction to misplaced criticism, and can soon turn to frustration when there is no opportunity to voice a defence or apology. Resentment can build, and the reaction of the criticised community or individual can become bitter and confrontational.

Engagement with public criticism, and a respectful defence for the belief that we have in Jesus is clearly taught in scripture. This is the reaction we want to nurture in ourselves and our communities! 1 Peter 2:15-17 says: 'For it is God’s will that by doing good you should silence the ignorant talk of foolish people. Live as free people, but do not use your freedom as a cover-up for evil; live as God’s slaves. Show proper respect to everyone.' This verse is taken from a passage exhorting the church to respect governmental institutions, even though these institutions may level criticisms against Christianity, which we should answer with the truth of the Christian message. And from the same book the famous apologetic appeal: 'But in your hearts revere Christ as Lord. Always be prepared to give an answer to everyone who asks you to give the reason for the hope that you have. But do this with gentleness and respect.'

Therefore, engagement with respect is what I think we ought to encourage, with Jesus as our champion and example, the Grand Master of apologetics!
Posted by Ruth Preston at 07:35