This article was first written for the CCK Reason Blog here: http://www.cck.org.uk/reason/isn’t-story-jesus-creation-based-mythology-came-christian-era

In the last few centuries, there has been an attempt to relate the life, work and message of Christ to earlier mythology. Some of the arguments have led some to the conclusion that Jesus didn’t exist, but was mythological like the gods that came before him.
The most scholarly and influential works that champion the alleged similarity between Jesus Christ and pagan mystery religions and mythology are by Franz Cumont and Richard Reitzenstein, from the late 1800s and the first half of the 1900s. These theories today are thought inaccurate due to recent research:

‘In recent years, however, the critical discussion of principles and concepts have been advanced, especially by Italian scholars. As a result a gradual erosion of Cumont’s and Reitzenstein’s positions is taking place’ (10/p.2)

Yet, there has been a revival of Cumont’s theories in recent years, most of which has been produced on a popular level in the form of the Zeitgeist Internet movie, and works by Tom Hurpur and Achrya Sanning. These works claim similarities between Jesus and dieties such as Mithra, Horus, Attis, Dionysus, Adonis and Zoroaster.

On a basic level, similarities should be expected between Greek and Egyptian mystery religions and Christianity. This is because the term ‘religion’ suggests foundational principles that are held in common. For example, they all seek ‘salvation’ in some sense of the word, though the various definitions of salvation involved may be so diverse that the similarity stops there. It is perhaps also true that in other secondary, non-doctrinal issues, Christians in the first four centuries were influence by the surrounding pagan culture, as there are similarities in art and the dating of festivals (18, 20/pp.24-25). But these parallels cannot be used to judge the veracity of the New Testament, as they do not affect the prescribed tenets of the faith, but are rather a matter of taste and culture. Much like most churches today worship with a guitar, which is an influence of contempary culture, but which does not rewrite the historic principles of the faith.

It should be mentioned that this debate revolves around the dating and placing of the sources. Many online articles claim parallelism due to the belief that Christians copied mythology that came before the birth of Christ. Often these articles do not study the connection between Christianity and Judaism, and therefore do not consider the Old Testament prophesies regarding the Messiah, that he would be born of a virgin (parthenos: Greek translation of the Old Testament, Hebrew version translates ‘young woman’: almah), would suffer to redeem Israel and the world (Isaiah 52:13-53;12, Psalm 22). These prophesies precede most myths the proponents of parallelism would use to discredit the New Testament (11/p.169,19).

Also, although most of the worship of the gods of parallelism did exist before Jesus was born, the textual sources, which are alleged to prove parallelism, postdate the 1st Century. As a result, we cannot be certain that these texts themselves were not influenced by Christianity, and not rather than the other way round (11,19).

It has been argued that Jesus Christ has much in common with Horus and Osiris, who were gods of Egyptian mythology. Some, but by no means all of the supposed similarities are as follows: Firstly, that Horus was conceived by a virgin (Isis), and secondly, that Osiris was killed and resurrected.

Firstly, Isis was not a virgin when she conceived Horus. Osiris was killed by his brother Seth, and dismembered into parts. As Osiris’ wife, Isis magically restored the body of Osiris, except the penis (which had been eaten by a fish). Therefore, Isis fashioned him a new member, and they coupled together. Thus Horus was conceived. There are different accounts of the tale some including direct sexual contact, and others metaphorical. In either case, Horus was the result of the intercourse between Isis and Osiris. (23, 21/p.77)

Secondly, it is true that Osiris was killed and resurrected, but the surrounding events are vastly different to that of Jesus’ life (and there are various versions of the Osiris myth). After Isis had restored him, Osiris was assigned god of the underworld, as he was not allowed to return to the land of the living (19), which suggests quite a different resurrection to that of Jesus Christ.

Lastly, W. Ward Gasque, theologian and author, contacted twenty leading Egyptologists on the issue of the comparison between Horus and Jesus. All denied the validity of such comparisons. (16, 15, 11)

Common statements about Mithra by the proponents of parallelism, which are claimed to be identical to that of Jesus Christ, are: Firstly, that Mithra was born of a virgin on December 25th in a cave. Secondly, as the "great bull of the Sun," Mithra sacrificed himself for world peace. Thirdly, He was buried in a tomb and after three days rose again, among many other claims. 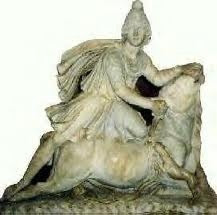 Firstly, Jesus was not born on 25 December, this is nowhere mentioned in the New Testament, the date was chosen for convenience in later church history to coincide with the winter solstice for social reasons. Therefore, this parallel is null and void. Likewise, Mithra was born from a rock, which cannot be argued to be a virgin, as a rock is a non-sexual object. (18,11/p.171, 19, 17)

Secondly, online resources (see references) suggest that Cumont’s theories about Mithra and the Bull were discredited mainly due to his presupposition that Ancient Iranian Mithraism was identical to its later Roman counterpart, which had been affected by Zoroastrianism. But Iranian Mithraic sources do not conclusively match the Roman legends of the slaying of the bull (12, 18). The Second Mythraic Congress of the 1970s in Tehran came to similar conclusions (18,11/p.168). In any case, Mithra (in Roman mythology) did not die for humanities redemption, but rather killed a bull, the blood and semen of which fell to the ground and symbolises the rebirth of all living things (21/p.58). Note that it was the blood (and semen) of the bull, rather than that of Mithra (unlike Jesus, who shed his own blood). And the rebirth of all living things, as in the time of spring, is quite different to the rebirth of those who accept Jesus as their saviour, which is eternal. It is also worth noting that the expression “he (Jesus) suffered under Pontius Pilate” in the Apostle’s Creed serves to link the death of Christ to a specific historic time and context, which again differs from the timeless, or seasonal, account of Mithra.

Thirdly, in response to the claim that Mithra was buried and rose after three days, there is no evidence that Mithra ever died; therefore he could not have risen from the dead. (17, 18, 19, 21/pp.58-59)

Although we have not looked at every parallel comparison in the short space available, it is very clear to see that the key comparisons between Jesus and the mythological gods are (on closer inspection) negligible. The terms 'resurrection' and 'virgin birth' have been used by proponents of parallelism to give credence to what is in truth, a very far fetched conspiracy theory, which has been widely discredited by scholars today.


1. Cumont, Franz. Texts and Illustrated Monuments Relating to the Mysteries of Mithra (1894-1900, with an English translation in 1903)

7. Massey, Gerald. Ancient Egypt in the Light of the World


8. Nash, Ronald. The Gospel and the Greeks

10. Burkert, Walter. Ancient Mystery Cults, Harvard College, 1987. p.3: ‘Now it is true that some ancient Christian writers were struck by certain similarities between Christian worship and mysteries, and they denounced the latter as devilish counterfeits of the one true religion . . . and even orthodox Christianity adopted the mystery metaphor that had long been used in Platonic philosophy: to speak of the ‘mysteries’ of baptism and the Eucharist has remained common usage. Yet this does not imply that Greek mysteries by themselves should be seen as predestined to move towards Christianity. The constant use of Christianity as a reference system when dealing with the so-called mystery religions leads to distortions as well as partial clarification, obscuring the radical differences between the two.’ http://books.google.com/books?id=qCvlvqCXF8UC&printsec=frontcover&dq=the%20gospel%20and%20the%20greeks&source=gbs_slider_thumb#v=onepage&q=the%20gospel%20and%20the%20greeks&f=false

23. http://www.bringyou.to/apologetics/HORUS.htmt
Posted by Ruth Preston at 08:10