Christ in the Story of Ruth 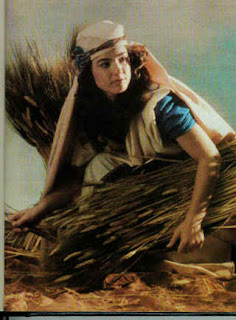 In previous blog posts, I have drawn attention to various Old Testament foreshadows and prototypes of Christ. In this article, I want to draw attention to yet another old testament parallel to Christ. This one occurs in the book of Ruth.

The story of Ruth begins with a man by the name of Elimelek, along with his wife Naomi and two sons Mahlon and Kilion, going to live in the country of Moab, in order to escape a famine. Tragically, Elimilek dies, leaving his widow Naomi with her two sons. The two sons both marry Moabite women, one named Orpah and the other Ruth. The two sons die after having settled in the land for about a decade, and only Naomi and her two daughters-in-law remain.

Having learned that God had provided food in Bethlehem, Naomi sets out to return home from the land of Moab. She urges Orpah and Ruth to return to their own land to find another husband and start to rebuild their lives. Orpah complies with Naomi’s request, but Ruth insists on travelling back to Bethlehem with her mother-in-law.

Naomi sends Ruth out to glean in the fields, picking up leftover grain from behind the harvesters. As it happens, Ruth gleans in a field belonging to a man by the name of Boaz, who is a relative of Naomi and from the clan of her late husband Elimilek. Boaz has compassion on Ruth, and offers his hand of protection. He tells her to glean only in his field and instructs the male harvesters not to lay a hand on her. He also tells Ruth, “whenever you are thirsty, go and get a drink from the water jars the men have filled.”

10 At this, she bowed down with her face to the ground. She asked him, “Why have I found such favor in your eyes that you notice me—a foreigner?”

11 Boaz replied, “I’ve been told all about what you have done for your mother-in-law since the death of your husband—how you left your father and mother and your homeland and came to live with a people you did not know before. 12 May the LORD repay you for what you have done. May you be richly rewarded by the LORD, the God of Israel, under whose wings you have come to take refuge.”

13 “May I continue to find favor in your eyes, my lord,” she said. “You have put me at ease by speaking kindly to your servant—though I do not have the standing of one of your servants.”

Significantly, verse 14 reports that “At mealtime Boaz said to her, “Come over here. Have some bread and dip it in the wine vinegar.”

Ruth continues to glean until evening and brings back to Naomi about an ephah, which amounts to approximately 30 pounds or 13 kilograms. Staggered by how much Ruth has brought back, Naomi enquires as to which field Ruth has gleaned in. She reports that she gleaned in the field belonging to Boaz. Naomi exclaims (2:20), “The LORD bless him!…He has not stopped showing his kindness to the living and the dead…That man is our close relative; he is one of our guardian-redeemers.” Now, the word guardian-redeemer is a legal term for someone who has the obligation to redeem a relative facing extreme hardship (Leviticus 25:25-55).

“My daughter, I must find a home for you, where you will be well provided for. 2 Now Boaz, with whose women you have worked, is a relative of ours. Tonight he will be winnowing barley on the threshing floor. 3 Wash, put on perfume, and get dressed in your best clothes. Then go down to the threshing floor, but don’t let him know you are there until he has finished eating and drinking. 4 When he lies down, note the place where he is lying. Then go and uncover his feet and lie down. He will tell you what to do.”

Ruth does as Naomi tells her. Startled during the middle of the night, Boaz wakes up to find Ruth lying at his feet. Ruth asks him to “Spread the corner of your garment over me, since you are a guardian-redeemer of our family.” As it happens, there is an even closer relative than Boaz who could serve as a guardian-redeemer. Boaz says (3:13), “Stay here for the night, and in the morning if he wants to do his duty as your guardian-redeemer, good; let him redeem you. But if he is not willing, as surely as the LORD lives I will do it. Lie here until morning.”

When Boaz speaks with the guardian redeemer, he at first says (4:4) “I will redeem it.” But when he learns that he must also take Ruth to be his wife in order to maintain the name of the dead with his property, he changes his mind for fear that he might be endangering his own estate. Boaz thus redeems the land and takes Ruth to be his wife.

Christ in the Story of Ruth

The most important symbolic manifestation of Christ in the story of Ruth is in Boaz’s role as guardian redeemer. In Boaz, we see Christ who has purchased the Church to be His bride. In Ruth 4:4-10 alone, the word “redeem” occurs a total of six times. In verse 10, Boaz explains that if one is to redeem the property, one must also wed the widow.

In order to have the right to redeem, our Lord Jesus had to become united with humanity, thereby becoming our fellow man. The name Boaz means ‘ability’. Our kinsman redeemer has the ability to save men to the uttermost. A kinsman redeemer must also be free of debt himself - likewise, Christ our kinsman redeemer was Himself free of sin.

As if that wasn’t enough, Ruth 2:14 refers to Ruth and Boaz at mealtime together, and refers to them dipping their bread in wine vinegar. The meal should remind us of our communion with Christ where the bread is symbolic of Christ’s flesh and the wine symbolic of His blood which is poured out for us (see Luke 22).

“But you, Bethlehem Ephrathah,
though you are small among the clans of Judah,
out of you will come for me
one who will be ruler over Israel,
whose origins are from of old,
from ancient times.”

The astonishing parallelism in all of the instances I have hitherto explored — and there are many others — with the gospel of Christ is striking, and assuredly is only explicable by the typical design of the inspiring Spirit.

Posted by Jonathan McLatchie at 05:39