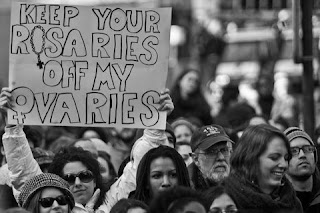 This blog was originally posted at my personal blog Mind the Evangelical here.

If one wants to be prepared to defend the pro-life position there exists a number of great resources from philosophers around like Francis Beckwith, Stephen D. Schwarz, Christopher Kaczor and Patrick Lee. Yet very few people who hold to the Pro-life view have ever perused their pages of their books, this leaves many of them unequipped to deal with some of the popular Pro-choice slogans and arguments that are often appear at first rhetorical powerful yet in reality are short on substance.

In light of this I thought I would very briefly in a few sentences respond to some of the most popular Pro-choice slogans and arguments. Some people might accuse me of attacking straw-man arguments, however in reality these arguments are both popular and frequently used. I'm more than happy to engage with the more sophisticated moral questions surrounding the Pro-life position but that is for another day.

Of course we all respect someone's right to choose, it would make you seem like a moral monster to deny something western civilisation values so highly. However, clearly there are many circumstances where the right to choose has its limitations. No-one is trying to tell women they can't choose what to eat or who to talk to but the idea that choice is absolute is nonsense. One must clarify what is being referred to when we speak about having a right to choose to do something. If I wanted to choose to shoot my dog or beat a child for fun you would likely be abhorred at the nature of my choice and tell me that I have no such right to do so.


Very few people think that we should be able to kill other human beings with impunity which means that the nature of this 'choice' begs the question and assumes something about the nature of the unborn. That they are different, less valuable, outside of our moral circle, disposable and whose geographical location justifies their killing in the name of Western autonomy. Clearly whether someone is male or female they do not have the 'right' to choose to do whatever they want. Dressed up in more philosophical language we would find ourselves responding to the bodily autonomy objection that has been suitably refuted elsewhere ad nauseam.

Let's try and use similar logic on some other moral quandaries, 'Don't like slavery? Don't own one.' Don't like wife beating? Don't beat yours.' Don't like child abuse? Don't abuse yours. Don't like strawberries? Don't eat them. What this slogan does quite effectively is that it moves abortion from being something that may be an objective moral wrong that kills a developing and innocent human being to one of personal tastes. Very few people would accept that preferring strawberries over apricots is morally similar to preferring to keep slaves or not, yet this is the category the slogan is putting abortion in. Slavery is wrong because it treats intrinsically valuable human being's as a commodities that can be traded and sold.

However the real crime of this slogan is that it promotes the idea that those who are Pro-life only think abortion is wrong because they don't like it, which is false. Whether someone likes strawberries or apricots is a personal preference that no-one would disagree with, but equivocating between that and an act that kills another human being is absurd and assumes moral relativism. This leaves the proponent of such a slogan in the position of having no authority to tell us that neither slavery and wife beating are wrong if I happened to like them.  Lets get this straight, when someone who holds the Pro-life view says abortion is wrong they are not simply saying they don't like abortion, they are saying it is objectively wrong regardless of how someone may feel about it.

3. 'Keep your Rosaries off my ovaries.'

What could be said in response, keep your ideology off my theology? I'm not a Roman Catholic and have never prayed the Rosary, however what this slogan seems to be suggesting is that any objections to abortion that may have some religious basis must stay out of the discussion. This assumes a few things. Clearly there are many religious people who are pro-choice so religious arguments may-well be of importance to them and if abortion is wrong then they would want to know. Secondly, in the grand scheme of things the Pro-life position is not necessarily a religious position, one can be a theist, pantheist or atheist and still be Pro-life. The fact that many Christians are Pro-life may be observably true but the wrongness of killing unborn human beings through the means of abortion would still be as wrong if it were said by an atheist. To be clear the Pro-life case doesn't have a gender or religion even if there may be a theological frame-work that best supports its conclusions.

Also as far as I'm aware those that hold to the Pro-life view whether religious or secular are not trying to tell women who they can and can't have sex with. Certainly the slogan makes a good sound-bite but in terms of substance like the other two I briefly responded to they are in reality pretty poor.

I'll add the next three soon. Please let me know your thoughts.
Posted by failedatheist at 10:20