A paradox of power 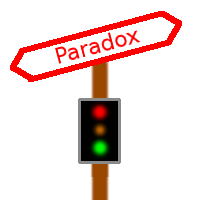 Every so often, people try to point out the inconsistencies inherent in being truly omnipotent. Could your omnipotent God make a sandwich too big for him to eat? Could he create a rock too heavy for him to lift? Could he create a problem beyond his ability to solve?
The standard answer is rather boring, delving into formal logic and contradictions in the definitions of the words. Strictly speaking it's "A rock an omnipotent being can't lift is a logical impossibility. Omnipotence doesn't imply the ability to perform logical impossible tasks."
Being asked the last one, however, I realised that there is something more significant about the questions: they focus on what God can do but ignore who God is. Moreover, God can and did get himself into a problem he couldn't solve!

The year is about 30 A.D.
The scene, a small hillside garden about 2 miles east of Jerusalem. It's a chilly spring night, and a small band of Jewish men are asleep on the grass. Their mentor comes down to awaken them, visibly distressed.
He has been desperately praying to his omnipotent God to rescue him from his approaching doom, but has ultimately resigned himself to continue as the Lord intended.
As the groggy disciples rouse themselves, they're startled by a commotion from the west. A troop of soldiers approaches to seize their master, guided in by their scheming one-time companion. The most reckless of the disciples intends to go down fighting, but Jesus himself commands him to sheathe his sword. Jesus does not call down a blazing band of angels to wipe out his attackers, but submits meekly to the arrest.

For hours Jesus is mocked, interrogated, and tormented. He's spat upon and beaten, and shuttled from court to court as the various local rulers play their political games over him. Though each decides that he must be innocent, they sentence him to die in order to placate the crowds. He's sent stumbling along the road carrying the massive wooden beam that will be his death, already almost blacking out as blood pours from his wounds.

On another mountain, hot, bare and dusty, Jesus hangs from tired arms as he struggles to breathe. Even his heavenly father can no longer say "This is my Son with whom I am pleased." Instead he looks at the broken flesh of his only child and turns away in disgust. Aside from the blood, sweat, and tears, Jesus bears the stench of thousands of years of human rebellion.
Completely alone in the hostile crowd, Jesus cries out one last prayer for the forgiveness of his murderers. He dies.

God got himself a problem that he couldn't solve. He was watching his own son die. Jesus' perfect life ended in the most torturous death. The Trinity itself, the divine being whose very breath is love, was torn apart. The Christ was condemned.


Of course at no point was God's power deficient. He has the power to flick Jupiter out of orbit and across the galaxy. Flicking away a small band of soldiers would have been no problem.
While his son suffered the humiliation of the courts, he could have sent a shining herald to demand that the charade deliver true justice.
Even on the cross, he could easily have sent a blast of celestial fire to burn up the mockers, with a flight of angels to carry his precious son down from the execution post.
However, to do so would condemn us to the consequences of a problem we got ourselves into, and certainly could not solve. To evacuate his Son would be to betray humankind to unavoidable eternal damnation. Jesus could survive, but we would be condemned.

When people raise such paradoxes, they may think that they've trapped God in his own rule book. Instead, the vast majority of paradoxes are self-evidently just foolish. God is by no means required to accept their taunting dares or their childish "I bet you can't..." Far above such games, he has the uniquely complete freedom to choose his own course of action. If he so decides, the glorious God can be mocked. If he so decides, the immortal can die. If he so decides, he can reduce his mighty voice to the whimpering of a baby. He is omnipotent in that he can do whatever he wants to do. If he does not decide to make an unmovable rock or an inedible sandwich, this doesn't reduce his might.
God is far more than a plaything for philosophers to hypothesise about. He has a greater mind and a fuller heart than all of humankind. He makes himself personable toward even the most downtrodden of human society, and a pillar of justice against their oppressor. He is not almighty in spite of his own choice of  constraints, he is almighty precisely because all his power is subject to his will. He is mighty because his justice, his holiness, his mercy, his gentleness, his hope and his love is who he is and he determines what he does.
Posted by Josiah at 21:18