Would Pontius Pilate have Released a Prisoner at Passover?

This is a question I’ve heard raised from a few sceptics previously. It stems from a popular strain of thought that suggests the more sceptical of something you are the more critical you are being. However the problem is that if such a level of ‘hyper-scepticism’ were used for any other ancient events or figures we would know very little about anything in the past. This leaves people espousing radical scepticism no more critical than those whose credulity may lead them to the same or other conclusions, as vocal as they may be. 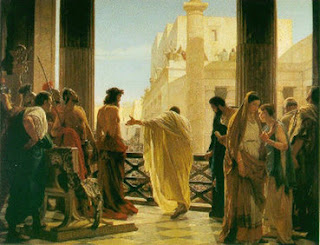 A type of informal logical fallacy known as an argument from silence is being used, what this means is someone draws a positive conclusion from the silence of a person or event. The argument from silence is unanimously recognised amongst historians to be one of the weaker weapons in the historians arsenal. Specifically here the argument used to deny that the gospels are correct in their recording of Pilates release of a prisoner at Passover (Mk 15:6, Mat 27:15, Luke 23:17 and John 18:39). It's argued that because there is no record of Pilate taking part in this custom outside of the New Testament it therefore is unlikely to have occurred. Now I may not be able to prove that this happened but it can be shown with a fair amount of certainty that it was most likely a historical event. All four Gospels record the practice of releasing a prisoner at Passover and its likely that Johns Gospel does so independently of the other three.


Although space doesn’t permit now, the gospel writers deserve the benefit of the doubt when it comes to ancient history and culture. They have proved to be accurate whenever they have commented on history, ancient customs or geography even when initially faced with unwarranted scepticism. The gospels are unanimously clear in their recording of Pilates pardoning and releasing of a prisoner at Passover.

Although there are no sources outside the New Testament specifically involving Pilate taking part in this practice, there are however sources that record examples of other Roman governors releasing prisoners, even at Passover. If other Roman governors had practised something similar at various times then such scepticism in the case of Pontius Pilate doing such is unwarranted.

1. Josephus records that when the Roman governor Albinus was preparing to leave office he released prisoners who had been incarcerated for crimes other than murder. 'he was desirous to appear to do somewhat that might be grateful to the people of Jerusalem; so he brought out all those prisoners who seemed to him to be most plainly worthy of death, and ordered them to be put to death accordingly. But as to those who had been put into prison on some trifling occasions, he took money of them, and dismissed them; by which means the prisons were indeed emptied, but the country was filled with robbers.' (Antiquities 20.9.3).


2. In the Mishnah (Jewish oral tradition, written in around AD 300) it records that “they may slaughter the passover lamb for one….whom they have promised to bring out of prison”. Now its not exactly clear but this certainly records a prisoner being released specifically at Passover.


3.A piece of papyrus also records a Roman governor of Egypt saying: “You were worthy of scourging but I gave you to the crowds.” (P.Flor 61, c. AD 85).

4. Pliny the younger from one of his early second century letters also has something important to note on such practices and who had responsibility to do so, "It was asserted, however, that these people were released upon their petition to the proconsuls, or their lieutenants; which seems likely enough, as it is improbable any person should have dared to set them at liberty without authority" (Epistles 10.31).


5. The author William Lane states ‘There is….. a parallel in Roman law which indicates that an imperial magistrate could pardon and acquit individual prisoners in response to the shouts of the populace’ (The Gospel according to Mark, p. 553).


Now although none of these examples are identical to the one in question, they do demonstrate to us that it is indeed plausible that Pontius Pilate took part in a custom that stipulated the release of a prisoner at Passover. Along with the Gospel accounts these ancient examples provide a strong case for the historicity of such a practice.

Three things sceptics assume and ignore when looking at this particular event:

1. They have made the unfounded assumption that the Gospels are untrustworthy and unreliable when recording things pertaining to history and culture, not only the miraculous.

2. They have to argue from silence rather than present positive evidence proving that such an event never occurred in the face of ancient documentation that does actually detail such a practice, backed up by corroboratory evidence as demonstrated above.

3. They have to ignore or reasonably explain away the recording of such a practice in the gospels which are types of Hellenistic biography that have proven to be reliable ancient documents.

One more issue that must be explained is that if such an event never took place, and could have been easily falsified by those who lived in Jerusalem at the time, why would the claims of Jesus’ disciples be taken so seriously and spread so quickly in the very place where it all allegedly took place? It's most likely because the disciples were not in the practice of reporting events that didn’t occur or describing people whom didn’t exist. It would have been highly embarrassing for the early church to have claimed such a public spectacle had occurred if it hadn't. Such an elaborate lie could have halted the first Christians in their tracks, yet in fact they went onto become a sociological phenomenon, showing that something of miraculous portions must have occurred. That Jesus lived, was crucified, died and rose bodily from the dead.