But you would say that... 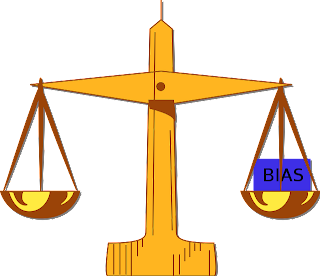 "I plead innocent of course.
If I say otherwise, I'll be trapped behind iron for the next few years at least."

When a defendant files an innocent plea, you can't just believe them. When a salesman heaps praise upon his product, you look for independent reviews before snapping up the offer. When a hopeful politician questions the character of the incumbent MP, you start to question their own integrity instead. In each case the person's report is suspect because they're clearly biased, and bias always tints their perception of  reality and sometimes pushes them to outright lie. They may be right, but it would be a mistake to take their word at face value.

However, it would be an even bigger mistake to dismiss every form of opinion as bias. A witness in aforementioned courtroom would be invaluable in finding the truth. Of course they will have their own rather definite account on whether the accused committed the crime; an account formed not by what is in their own interest but by what they saw and heard at the scene. While some may have subtle biases of their own, a witnesses word should be trusted much more readily than a defendant's. Similarly, if an expert were arguing for a policy, it would foolish to ignore their decades of training and years of research into the matter because they support one side rather than the other. You can't trust an expert to settle the matter with a word, but you should at least pay attention to what they have to say.

Imagine if, for fear of bias, only the true uninformed and unopinionated were accepted as sources. Would they be reliable? Could you investigate a contentious issue such as evolution while ignoring the likes of Charles Darwin or Thomas Huxley? Of course such people have an opinion. You'd be worried if they did not!
Similarly, could you investigate the life of Jesus if you rule out as a source anyone who lived around him and was fascinated by him?

Some inquire "If Jesus was real, if he was who you say he was and did what you insist he did, why aren't there any accounts in the writers of the day?" Now there is that fragment of a paragraph in Josephus's writings, but that's hardly enough for so world-changing a man. Why are there no biographies or his life or commentaries on his teachings?
The answer: there are. They're far more famous and far more popular than Josephus. We know them as Matthew, John, James, and others. In addition to these, events surrounding the explosive growth of the early church are recorded by members of that church such as Polycarp and Ignatius.

These men were all Christians, and that is no surprise and no worry to me. I should be very suspect of the claims of Jesus if the majority of writings presented him as a quack or a conman. As it is, the majority witnesses believed that he was important enough to tell the world about, and when they put pen to parchment it was to share the good news.

An honest seeker can ill-afford to restrict themselves to the testimony of those who believe they're spouting nonsense. The first source to turn to to find out about Jesus should not be a cynical scholar of the twenty-first century but a witness or researcher from the first. The gospel writers easily qualify as such sources. Their own statements of intent make this clear.


"This is the disciple who testifies to these things and who wrote them down. We know that his testimony is true."- John 21:24

"With this in mind, since I myself have carefully investigated everything from the beginning, I too decided to write an orderly account for you, most excellent Theophilus," Luke 1:3

For anyone who would investigate the incredible character Jesus of Nazareth, these "gospels" make for an excellent starting point.
Posted by Josiah at 16:00

Email ThisBlogThis!Share to TwitterShare to FacebookShare to Pinterest
Labels: Common Objections, Reliability of the Bible