What is the Gospel of Barnabas?

The Gospel of Barnabas is a best seller in predominantly Muslim countries all over the world which may come as a surprise to many Christians who don't have a clue what it is [1]. There are several reasons why Muslims are fascinated by it and if it were accurate would have dramatic consequences for Christians all over the world. You can actually get it for your Kindle here. However as I will go on to demonstrate, the Gospel of Barnabas is an apocryphal fraud probably written sometime in the fourteenth or fifteenth century. Thankfully some Muslims have acknowledged its dodgy origins and  have admitted that its a fraud that should be ignored, sadly though its popularity means it is commonly brought up in conversations between Christians and Muslims. Hopefully this short article will help Christians to know a little more about the Gospel of Barnabas and will encourage Muslims to do a little more research before they make such extraordinary false claims about Jesus. The gospels we have in the New Testament are the most historically accurate and must be taken seriously by those wanting to know Jesus. 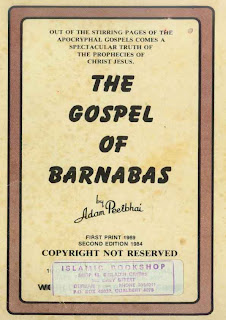 What have Muslims said about the Gospel of Barnabas?


Muhammad Ata ur-Rahim, insists that "The Gospel of Barnabas is the only known surviving Gospel written by a disciple of Jesus.... [and] was accepted as a Canonical Gospel in the churches of Alexandria up until 325 A.D." [2].

M. A. Yusseff, asserts that "in antiquity and authenticity, no other gospel can come close to The Gospel of Barnabas." [3].

Just those two quotes demonstrate just why so many Muslims around the world believe that the Gospel of Barnabas proves that what is taught as Christianity today is wholly false and that 'real' Christianity was preserved only in the true Injil (Gospel) of Barnabas.

So what does the Gospel of Barnabas say about Jesus?


The Gospel of Barnabas is much longer than any of the canonical Gospel and contains 222 chapters which allegedly tell us lots of things about Jesus that weren't revealed in the other gospels.

Its no wonder Muslims love the Gospel of Barnabas, just look what chapter 112 says even if this does present some challenges for Muslims since the Qur'an actually claims that Jesus is the Messiah/Christ (Sura 4:171) yet here Jesus is saying that Muhammad is actually the coming Messiah.


Know, O Barnabas, that for this I must have great persecution, and shall be sold by one of my disciples for thirty pieces of money. Whereupon I am sure that he who shall sell me shall be slain in my name, for that God shall take me up from the earth, and shall change the appearance of the traitor so that every one shall believe him to be me; nevertheless, when he dies an evil death, I shall abide in that dishonour for a long time in the world. But when Muhammad shall come, the sacred Messenger of God, that infamy shall be taken away. And this shall God do because I have confessed the truth of the Messiah who shall give me this reward, that I shall be known to be alive and to be a stranger to that death of infamy." (Gospel of Barnabas, Chapter 112)


For the reasons above Muslims have argued that Christians have suppressed the Gospel of Barnabas simply because of its Islamic character and its pointing to someone greater than Jesus in Muhammad. Its is argued that it is an original gospel written by a first century Jewish disciple of Jesus, there are however a substantial array of reasons why this cannot be the case and that it is most likely the creation of an imaginative Muslim convert.

The Gospel of Barnabas' Authenticity


Scholars Longsdale and Ragg conclude in their edition of The Gospel of Barnabas that "the true date lies...nearer to the sixteenth century than to the first." [4]. Longsdale and Ragg were the first people to translate an English version of the Gospel of Barnabas in 1907 and clearly stated that they believed it to be a fake. However when it was translated into Arabic the suggestion that it was a fake were surprisingly left out therefore leaving its readers to assume its accuracy. Its been suggested that over 100,000 copies in Pakistan alone have been printed  [5].

One major problem for Muslims is that the earliest known manuscript comes from an Italian manuscript which scholars have unanimously dated to be from the fifteenth or sixteenth century, meaning that its 1400 years after Barnabas lived [6]. That is obviously a problem for any document especially so if it goes against the grain of what we already know about a historical figure, not to mention what seem like claims too good to be true for Islam. For such claims to be taken seriously there would be some serious challenges to be overcome from the data, none of which are met by the Gospel of Barnabas. One must ask themselves why if such a book existed prior to the fifteenth or sixteenth centuries was it never quoted or referred to by Muslims, especially when such intense debate between Muslims and Christians was ongoing from the seventh century? With just this in mind it should be clear that this is not a book that should be taken seriously by anyone with any intellectual integrity.

There are a number of errors which demonstrate quite clearly that the Gospel of Barnabas is the work of a forger with an axe to grind, albeit one that was prone to making some real clangers.

If Barnabas was  the author one would expect him to have at least a basic grasp of some Greek and Hebrew terms used commonly in Christian and Jewish vocabulary. In chapter 2 Barnabas writes that Jesus is the Christ which is the Greek translation of the Hebrew word translated as Messiah. Both words in English are used interchangeably because they mean exactly the same thing. This means that one cannot be one without being the other since they are both referring to the same office and role. Yet in chapter 42 Jesus denies being the Messiah, which leads to a strange situation where Jesus claims to be the Christ but not the Messiah which the real Jewish Barnabas undoubtedly would have known was a clear contradiction.

In chapter 3 of the Gospel of Barnabas we are told that whilst Herod was ruling at the time of Jesus' birth (AD 4 or 5) that Pilate was also governor presumably of Judea. Yet Pilate wasn't in power for another three decades from AD 26-36, this is about as false in ancient history as anything can be demonstrated to be false.

There is also the question of how a decree by Pope Boniface made in 1300 made its way into the Gospel of Barnabas. He had wrongly decreed that the year of Jubilee should be celebrated every one hundred years when biblically it was declared to be every fifty years as stated in Leviticus 25:10-11. This means that the author must have lived either during or sometime after this decree had been made as it was subsequently undone by the next Pope, Clement VI who put it back to every fifty years. Chapter 82 of the Gospel of Barnabas has Jesus referring to the Jubilee as every one hundred years thus pointing to the author most likely living during this period.

One last clanger before I round up is the reference to wine being stored in wooden barrels in chapter 152, which is surprising since this was a medieval European practice and one not practised in first century Judea where wine was stored in skins. This once again points to its authorship sometime after 1300 and not by the Barnabas refered to in the New Testament. There are a number of other errors that would lead the unbiased mind to conclude that the Gospel of Barnabas arose sometime in the medieval period and is not a reliable first century document. The Gospel of Barnabas is in reality nothing more than the fraudulent work of a very imaginative and error prone Muslim. It contradicts both commonly held Islamic and Christian beliefs aswell as not being quoted from by any of the church fathers or any early Islamic apologists who could've made use of it. If we want to read any reliable accounts of the life of Jesus I suggest we stick to the four gospel account recorded in the New Testament writings.
[1] - Norman Geisler, Baker Encyclopaedia of Christian Apologetics, p. 67.
[2] - Muhammad Ata ur-Rahim, Jesus, A Prophet of Islam, p. 41.
[3] - M. A. Yusseff, The Dead Sea Scrolls, The Gospel of Barnabas, and the New Testament, p. 5.
[4] - Longsdale & Ragg, The Gospel of Barnabas, p. 37.
[5] - E. M. Hicham, Your Questions Answered, p. 29.
[6] - Norman Geisler, Baker Encyclopaedia of Christian Apologetics, p. 68.