Why it's impossible to Tithe today - What is Biblical Tithing?

A little bit different to what we usually post about here but I  think the issue of how we use our resources to be highly important. Especially if what we're doing with it is in fact rather un-biblical. We are responsible for using our minds when answering sceptics objections, and we should  be using it when we give our money away or feel pressured into doing so. This post will briefly describe tithing as understood in the Old Testament (OT) and in my next post on tithing I will examine some arguments given in support of Christian tithing and give a short response to each of the points. 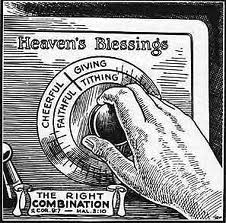 So before we can get into any debate of whether or not we should tithe its important to define our terms. This is because many Christians start from the assumption that what they practice in their churches today is actually biblical tithing. However if you start from that assumption you will always misunderstand what tithing actually is and isn't. It may come as a surprise to many Christians but what is practised in many churches today is not tithing as prescribed in the scriptures. It also often comes as a surprise to Christians when they find out that Jesus and Paul wouldn't have tithed and that the total amount tithed by individuals whom actually met the specific requirements in the OT would have resulted in a total of 23%+. In fact its actually impossible to tithe biblically today. Especially so if your outside Israel as that already rules you out, not forgetting that there is no temple (destroyed in AD 70), storehouse, and no Levitical Priesthood to receive your tithe offerings.

OT biblical tithing worked in a 7 year agricultural cycle known as the Shmittah cycle similar to the 7 days of creation.

- The 7th day of creation was the day God rested from creation and the 7th day of the week became known as the Sabbath, a time to honour God and rest from work.

- Every 7th year was a time for the land to replenish itself known as the sabbatical year or Shmita.

Within this cycle there are four key terms that describe actions and tithes made during this time and they are  1. Maaser Rishon, 2. Maaser Sheni, 3. Maaser Ani and 4. Shmita. The term Maaser literally means "a tenth" and can be applied to either agriculture (Cattle, wine, olive oil, grain etc) or money. However there is only one exception where money was actually spoken about (Maaser Sheni). It can be safely argued that 99% of the time anything was tithed under the law in the OT it was referring to agriculture and not finances. Tithing was applied only to produce grown in Israel, anything else simply couldn't be tithed by definition. This meant that if you were part of a trade such as carpentry or tent-making (Jesus and Paul), one would not be obligated to tithe since your produce wasn't from the land of Israel. Giving a tenth was also a common practice in many middle eastern nations/cultures and is mentioned in the OT before the Law of Moses was given (Gen 14:17-20, 28:22). Tithing in middle eastern culture was often used to support kings and religious sanctuaries.

Literally means first tithe. This was the 10% of an individuals produce and would include grain, olive oil, wine, fruit or cattle and was then given to the Levites. The Levites would then give 10% of that to the Priests as the Lords sacred portion as outlined in Numbers 18:21-29. This tithe was to be performed on the 1st, 2nd, 3rd, 4th, 5th and 6th years of the Shemittah cycle. The Levites served God as the spiritual leaders of Israel and because they had no land inheritance as the other tribes this maaser served as their livelihood. Part of the Levites job involved ministering to the priests and looking after the Tabernacle (Num 18:4-6).

Maaser Sheni
Literally means the second tithe and consists of 10% of the remaining food/produce after Maaser Rishon has been taken. This tithe was to be paid on the 1st, 2nd, 4th and 5th years of the shemittah cycle. It was then to be brought to the temple in Jerusalem where it could be consumed. However if someone was coming from a great distance to Jerusalem it was permitted that they could sell their produce for its monetary value. It could then be easily brought to Jerusalem where the money could be used to buy anything you wanted to have in the presence of the Lord with your family, which amounted to having a big party (Deut 14:22-27).

Maaser Ani
This was commonly referred to as the poor man's tithe and was to be made on the 3rd and 6th years of the Shemittah cycle. This was to be given to the foreigners in the land, Levites and the widows and orphans who were allowed to either eat it themselves or sell it to buy what they may have needed. It was also 10% of the food left over after Maaser Rishon had been given. It was seen as a God inspired obligation to support and protect those who were less fortunate than themselves. This can be seen in Deuteronomy 14:28 and 26:12. This tithe demonstrates the compassion and love that God expected from his people, such compassion, love and care should likewise be inherent in our giving. We are also responsible for making sure that we are giving our resources to those whom can be trusted to actually use what we give effectively and honestly.


Shmita
This was the 7th year of the Shemittah cycle and was a sabbatical time where the land was left alone and no tithe was given. The land was allowed to replenish itself and the poor were also allowed to take freely anything that grew during that time period (Exo 23:10-11 and Lev 25:1-7). Also during this time if a fellow Hebrew who had given himself to another to serve him to pay a debt it was during this time that the debt was settled and the servant to be freed. Hence why the Shmita was known as the year of release (Exo 21:1-6, Deut 31:9-13).

Biblical Giving
Now I'm not saying we shouldn't give, we should be the biggest givers on earth. We should be giving to the poor, widows, orphans and anyone who is in need more than any people. Even if we can't practice OT tithing, the principle of helping the poor, widows, orphans and foreigners ought to remain in our giving. Paul says we should give out of freewill, in proportion to what we have, willingly and never in response to pressure from anyone no matter how many times your pastor may quote Malachi at you (2 Cor 8:5-12, 9:5:13). Jesus in fact calls us to a much higher standard than what is described as tithing in Christian culture today. In Jesus' sermon on the mount 25 of 109 verse talk about money and possessions which should demonstrate to us the importance of doing what's right with our money. Using OT verses as support for practising tithing today is like arguing that because Peter cut off someone's ear once we should do that as-well.

In my next post I will examine some of the arguments given by those who practice what can only be described as Christian pseudo-tithing. The above present a basic summary of tithing in the OT and will hopefully allow people a little more insight into the subject. What is practised today is far removed from the scriptures and has its roots in the land-leasing laws of the middle-ages. Jesus came to free us from bondage, not to enslave us. The psychological abuse associated with a heavy focus on tithing in many charismatic and pentecostal churches today can only be described as a type of abuse and spiritual slavery.

Before anyone asks I'm not opposed to people using a tithe of your wages as a starting point in our giving, however there should still remain cautious in that approach. Only God truly knows what is sacrificial giving for an individual and ten percent can often be burdensome for a single parent when a well-paid bachelor wouldn't even notice that the money had gone. With that in mind it should remain up to the individual how much they actually feel/think they should give. Remembering that the tithe was to help the poor, not to place a burden upon them.