The late Christopher Hitchens in his rhetorical master-piece that is God is Not Great argues that religion as a whole is a terrible evil, Dawkins claimed that God is a sort of mental illness and the rest of the four horsemen, Dennett and Harris offer just variations on those themes.

If you are of the sceptical variety and only read other Atheist writings, that is to say that you only learn about Science, Philosophy, Literary Criticism, History and the like from other Atheists [This is not to say that this is the case for all Atheists, but certainly a growing minority] it’s no surprise that many have come to believe that Christians do and have done very little good in the world. I’ve encountered many Atheists unfortunately of this type who are just as indoctrinated as the people they claim they are against, sadly the irony is lost on many of them.

However I don’t want to appear overly negative, in fact many of the people I would rather spend time with happen to be thoughtful and pleasant Atheists. Sadly many although not all Christians are not interested in intellectual matters and I admit I have to return to a select group of non-theists for interesting intellectual discussion.

Even those people who don’t adhere to a particularly sceptical view of the world will have had their view of Christianity shaped by the often negative depiction through the media. EastEnders for example had a Christian Pastor murdering someone and then kidnapping his girlfriend in 2010, for my American friends EastEnders is one of the most viewed soaps on British TV. From the media you tend to get the picture that Christians in America are allegedly all like George Bush and Christians here in the UK are known more for what they are against rather than what they are for, as we all allegedly hate homosexuals, people who have abortions and Jerry Springer the musical.


Needless to say we may not agree with those things but we don’t hate anyone and in fact Jesus warned his followers many times to practice love over hatred and Christians are made aware of the seriousness of hatred in several places [2].

Unlike English there are several words for love in Ancient Greek but the one that Christians are well know for expressing, the one that can bring radical change is agape. It isn’t like romantic love Eros, it’s a sacrificial love, a love that will do what-ever it takes to accomplish it’s goal. It’s the love that’s perfectly encapsulated in Jesus’ sacrifice on the cross, a love that knows no limits or boundaries, only love like agape can make mountains move and governments tremble. 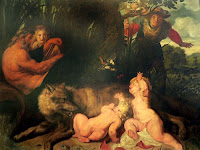 It was Christian love that compelled the early Christians to rescue children who were abandoned to die by their parents, Frederic Farrar noted that ‘infanticide was infamously universal’ in Greek and Roman culture in the early years of Christianity. It was so prevalent that it led Polybius to conclude that the population decline in ancient Greece was due to the practice [3]. Infanticide and abandonment was so ingrained in Greek and Roman culture that even some of their mythology stemmed from its reality. The founders of Rome were allegedly Romulus and Remus, two boys who had themselves been left to die. In Greek culture, there is Oedipus who was abandoned to die as a child by king Laius of Thebes, as-well as Poseidon and Paris, famous for his part in the Trojan war [4].

It took Christians to actively oppose the practice through appealing to our universal value and worth through creation in the image of God, rescuing children and arguing that infanticide was no different to murder. Lactantius, one of the early church fathers said that ‘it is as wicked to expose as it is to kill’ [5]. It was Christian love that drove the early Christians to rescue and bring up and adopting the abandoned children of prostitutes, prisoners, thieves and runaway slaves even in spite of daily persecution just for being Christians and failing to worship the Roman pantheon. This hard work eventually resulted in the Roman emperor Valentinian outlawing infanticide in AD 374 and making it a criminal offence to abandon your child.

It was Christian love that in AD 325 when Christians were finally safe from Roman persecution that Bishops were urged to build hospice/hospitals in every city that had a large church. Hospitals weren’t just for the sick as they are today, they also provided shelter and safety for the poor and cared for the mentally ill [6]. Today we still see the remnant of the past in our with the large number of hospitals named after Jesus’ disciples or other saints. It’s immediately striking that one of the first things Christians started doing once their own safety has been assured is to think about other people, once again demonstrating the seriousness of which they took Jesus’ teachings [7]. Something that was swiftly lost after the state legalisation of Christianity under Constantine, this lead essentially to everyone in the empire eventially viewing themselves as ‘Christians’. However Christianity is not something one can be born into, you must make an informed choice about whether you want to follow Jesus. Being a Christian isn’t like inheriting the crown.

It was Christian love that led to the abolition of chattel slavery in 1833 through the hard-work of William Wilberforce, Joseph Sturge, Thomas Clarkson, Thomas Buxton and Elizabeth Heyrick as-well as many other Christians. Some sceptics want to argue that slavery was legalised and even encouraged in the Old Testament, however what is spoken of in the Old Testament has nothing in common with Atlantic chattel slavery, the word used for slavery in the Old Testament is ebed which is better understood and translated as a hired worker or servant [8]. To compare the two is historical dishonest and inaccurate, which is why Christians were at the forefront of ending what was a most disgusting and inhumane practice.

Even in terms of Antebellum Slavery it would have been impossible to practice even if they actually did what was stipulated in Israelite Law, not only would it have been impossible but considered a capital offence. People were most commonly kidnapped from Africa and sold to the highest bidder on arrival in America, whereas Exodus 21:16 states that He who kidnaps a man, whether he sells him or he is found in his possession, shall surely be put to death. If kidnapping was a capital offence then the whole foundation was removed and therefore comparisons between the two are unfounded.

Christian agape has been and continues to be at the forefront of dealing with injustice, poverty and the like, with organisations like Compassion, Stop the Traffik, Christian Aid, and the Salvation Army. Certainly Christians often fall short of what is asked of us but to write Christianity off as something that is evil and not a force for good in the world is pure hyperbole. It may sound like a cliché but people will always let you down, but Jesus really never will, this is why we should never idolize people and elevate them to a place where only God belongs.

Atheists having their cake and eating it…

Something I’d like to point out briefly is that many sceptics like to have their cake and eat it in terms of how they look at Christians in History. For instance when Christians have committed some atrocity they were the real Christians, not merely expressing their actions in the only terms and expressions they knew [I.E. Christian ones], or looking for justification for their actions, they were the real thing even though their actions often demanded they ignore what Jesus actually taught. This is not to excuse genuine Christians who may have been involved in something evil, but an honest observer must acknowledge that such a person must ignore Jesus words, not live by them. No one Christian is perfect, that’s why we have a perfect saviour in Jesus who represents us, the righteous for the unrighteous [9].

We are told that the Christianity held by the vast majority of early scientists who were responsible for what we term the modern scientific method was simply incidental as it was just the culture they were in. That is to say that Christianity was the only cultural language they had to use to describe their investigations and desires. So if you were a Christian who did something that the New Atheists appreciate then they were secretly sceptics or would have been if they were born today, but if somebody did something shameful it was because they were a Christian and demonstrates just how evil Christianity can make people. Okay I understand, wait no I don’t.

However it was their belief in the intelligibility and rationality of a created universe that was the basis for their investigation, Alfred North Whitehead argued that science developed in Europe because of the widespread ‘faith in the possibility of science…derivative from medieval theology’ [10]. It was the reason why such a method did not develop elsewhere, such investigation necessitated that the Universe could be trusted.

My argument however here is not to demonstrate the necessity of theistic belief for the genesis of science but simply to point out the obvious double standards held by many of Atheisms most popular protagonists.
Just for interests sake it’s worth having a look at some of the scientists who were considered to be very devout believers by the standards of their day, this list would include:

Bayer, Briggs, Fallopius, Grimaldi, Leibniz, Wallis, Pascal, Picard, Newton, Napier, Mersenne, Ray, Riccioli, Scheiner, Steno, Vesalius and Wallis [11]. These people were the scientific heavyweights of their days and they had thought about what they believed.

Forgetting that Weinberg assumes that his definition of evil is epistemologically justified or that the New Atheists can even ground their ethical judgements in anything but emotive preferences, it’s surprising that they often speak with such moral superiority. Christianity like any world-view, can be, and has been abused, that is historically demonstrable. Weinberg though is at least partly correct, it’s people that are the problem and when mixed with any ideology whether that be a secular or religious one there is the potential for great evil.
The twentieth century demonstrates beyond reasonable doubt that the abuse of any ideology, especially secular ones in this case can have terrifying consequences. Christianity has done much good and continues to do so but I suppose you won’t hear about that much. But Christians don’t do it for the personal fame or glory, we are compelled to do so by Jesus and have the perfect example by which to live out Christian agape to the world. Is Christianity evil? No.

Richard Dawkins at the recent 'Reason Rally' in Washington told the crowd to “ridicule and show contempt” to Christians. Can you imagine if Rowan Williams the Archbishop of Canterbury said that about Atheists?

Let me know your thoughts.