One of our goals here is to give a Christian response to accusations and claims made against Christians in the media, Michael Amherst's article in the Guardian here seems like a good place to start.

Earlier this month I returned my degree to Oxford University. This was in protest at the failure of my old college – Exeter – to adequately address the widespread offence caused by them hiring out the college to a fundamentalist Christian group. The college authorities fail to grasp that the defence of the rights of all students requires affirmative action, not mere lip service to past achievements. Exeter's refusal to either cancel the booking or to apologise for it has provoked widespread condemnation, both within the University and the national press.

If I was Amherst I would have never have given that Oxford degree back, whether symbolic or not it does look good on your CV in the current job market, I wonder if he'll be consistent and take it off his CV? He claims that Exeter College fails to defend the rights of all students, however what about the rights of those students who disagree with his views on this specific subject and their right to hear a view that he doesn't hold. Does he expect a written apology every-time a group uses Oxford's premises that he disagrees with? Although he's right that Exeter's refusal to cancel the event did make it into the press but going by the comments there were many people that disagreed with Amherst's conclusions and claims.

I did wonder why Amherst felt the need to refer to Christian Concern as a fundamentalist Christian group, yes historically as a protestant group the term is correct, however the modern usage as intended  here is one that strikes fear into peoples hearts, as if Christian Concern are going to steal your children and plant bombs. Needless to say they are not, Jesus taught his followers to love and treat with respect those who disagree with them (Matthew 5:44).

Is it okay just to add 'fundamentalist' to the end of a groups name in an attempt to bypass any rational discussion? If it is then I suppose it would be accurate to describe Amherst as belonging to a radical leftist fundamentalist group who seeks to ban any group that deviates from his strict ideological view of the world. However by doing so I'm saying to people that he's a 'fundamentalist' he isn't worth engaging with because he's either stupid, fanatical, irrational or a combination. I'm not saying he's any of those things, after-all he seems articulate and passionate about what he believes to be the right thing. Sadly though that's how the term is understood today and using it isn't a substitute for an argument.


The arrival this weekend of The Wilberforce Academy will be met by student protests. The conference is run by Christian Concern, who state that the conference's aim "is to raise up the next generation of Christian leaders who will take a bold stand for Christ within their spheres of influence." Christian Concern are a political pressure group, whose adherents hold views at odds with the majority of Christians, including those in Exeter College chapel, of which I was once a part. They oppose gay marriage and gay relationships as unnatural and immoral, support reparative (cure) therapy, and want abortion to be made illegal. Its CEO believes Islam to be the work of the devil.


Perhaps when you click on the link giving you information about The Wilberforce Academy and you will notice the focus of it is not to lambaste the LGBT community contrary to what Amherst's article may lead you to believe. Yes Christian Concern may hold some views that the majority of Christians may disagree with although I'd be inclined to agree that most Christians do not agree that same-sex marriage ought to be legalised when Civil partnerships already give same-sex couples equal legal rights.


The difference in presuppositions here is striking, if you think that human life begins at conception as Christians generally do then its follows logically that we would be against any legislation that states that it is morally justifiable to intentionally end that life. Stating that in an ideal world abortion should be illegal from that starting point shouldn't be a shocking conclusion to arrive at. Its a sad reflection on Amherst and society when he thinks that mocking a group that thinks its wrong to purposely end the life of those in the womb is the view that should be ridiculed. I imagine though Amherst is happy that he wasn't aborted.

Now to reparative therapy, I am equally disgusted by the methods employed in the past by various psychologists and religious groups whom used methods such as inducing vomiting through drugs and other pseudo-methods to try and 'cure' homosexuals. Amherst is spot on here, Christians shouldn't view homosexuality as something that can be 'cured'. That said there are numerous examples of people who once considered themselves homosexual and no-longer do, we should be able to talk about such cases without being labelled homophobes.

It seems unfair and inconsistent for the LGBT community to on one side acknowledge that gender is malleable and subject to change whilst denying that this could be the case in terms of sexuality. When people are unsure about their gender they are often encouraged to seek counselling, shouldn't people who are uncomfortable with their sexuality be able to do the same even if its away from homosexuality? I don't see why it should be okay to seek help when one is uncomfortable with heterosexuality but not the alternative.

Diarmaid MacCulloch, professor of the history of the church, in the theology faculty stated that the conference goes against "the University's stated commitment to welcoming diversity amongst its students, staff and visitors". However, Exeter claim that to cancel the conference would not be "viable". If this is the case, then their weak response is every bit as offensive as the original failure to have adequate checks in place.

So following this logic should all Christian groups be banned from Oxford just in case they may believe something Amherst and MacCulloch don't agree with? Surely welcoming diversity for all its students means exactly that, since the event is specifically for Christians the College has an obligation to also support events that cater for their Christian students, whether they agree with all the content or not.


It would seem that Oxford has seen some sense and taken Amherst's complaints seriously whilst recognising that to pander to his personal ideological preferences would be unfair to those who do not agree with him. As the group concluded anyway Christian Concern is unlikely to want to come back anyway, which is sad, from what I've heard its a lovely place...as long as you avoid the Orwellian mind police!

This is not just a minor skirmish within an ivory tower but speaks to our ongoing national debate over conflicting rights. At its heart should be an understanding that there is a fundamental difference between who we are and what we believe. There is a difference between turning away from a community an organisation that looks to intrude on the rights of its members and the conflicting views of scientists and astrologers, say. There is also a difference between espousing values that some regard as intolerant and looking to impose them upon other people; the difference between preaching against homosexuality and telling a gay couple in the street that they will "not inherit the kingdom of heaven" (implying they would burn in hell).

Amherst manages here to describe a trap he argues other people fall into and then falls down it himself. He makes a distinction between believing something to be true and looking to impose that on other people. Hmm...you mean like believing that we should legalise same-sex marriage and all the other ideological jargon and then imposing it on all the students, and then banning any groups from using their grounds that don't agree with his particular perspective on the matter?

That doesn't sound very tolerant. It seems typical of some liberals today to condemn you for not being tolerant and in the same breath they do the thing they were just condemning you for allegedly doing. It's hard to keep up with the moving goal posts.

Every bit as worrying as their continuing attack on gay rights is their support for Nadine Dorries's recent campaigns for a reduction in the abortion time limit and a change to the rules on abortion counselling. It is sad that the first previously all-male Oxford college to have a female rector, back in 1993, should provide an unchallenged platform for those who oppose a woman's right to choose. 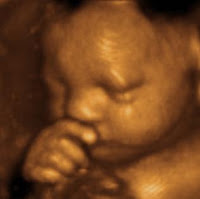 Yes how dare they be critical of something that may indeed end the life of a human being, albeit at an early stage of human development. Again starting from the assumptions that we are all created in the image of God (Imago Dei) this is clearly a logically consistent view to hold and with the continued development of ultrasound imaging we can clearly see just how human we are at certain stages of development.

A women's right to choose is at the point of having sex (Obviously this isn't the case in rape, although rules shouldn't be built on exceptions to the rule generally), there is no human right to choose to end the life of someone else, it may be lawful but it certainly isn't moral. The foetus is a genetically distinct individual from the mother whom she shares 23 chromosomes with, and unless you want to argue that mum can have a penis and testicles as-well as her own reproductive organs whilst she's pregnant then its difficult to argue that the foetus ought not be worthy of protection and its own rights to life. The foetus maybe in the mothers body but it certainly isn't part of it.

The only thing that is sad in my opinion is Amherst's views on the matter. It should be noted that the Wilberforce Academy is not at Oxford to oppose women's rights but instead to teach delegates to 'be prepared for servant-hearted, Christ-centred leadership in public life, having been equipped with a robust biblical framework that guides their thinking, prayers and activity in addressing the issues facing our society. We hope that they will also develop lasting friendships with peers and mentors that will be a source of support, encouragement and accountability for years to come.' You can read more here.