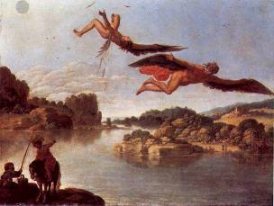 For years I've been fascinated by the story of Daedalus and Icarus, I'm not sure where this all began, I just find the whole account fascinating. One of my favourite songs is about the the story, its a great song by Thrice called 'Daedalus'. Its a story of creativity, shame, murder, ingenuity, anger, lust and suffering, what else could you want from a story?

Daedalus was thought to be somewhat of a genius, specialising in the arts and the making of life-like sculpture. He is also said to have designed many of the tools used by stone-masons. It was said of his sculptures that they were so life like that the had to be tied down to prevent them from walking away! Daedalus was also the son of king Erechtheus of Athens and Iphinoe.

Among the many apprentices in Daedalus' workshop was his nephew Talos. He learned Daedalus' craft so well that it is said that he surpassed his uncles own genius. One day Daedalus in a jealous fit of rage threw his nephew off the Acropolis and killed him. It was for this crime that Daedalus was tried and sentenced to exile to the Island of Crete under King Minos, whom after hearing of Daedalus' talents gave him a home and proceeded to give him the task of building him a new palace. It is these famous Minoan palaces in Crete that are said to have been the work of an unknown Athenian craftsman. Daedalus was also responsible for making the hollow wooded cow into which Pasiphae inserted herself in order that she could mate with the white bull sent by Poseidon, the result of which was the famous half-man half-bull Minotaur. Daedalus was then made to build the labyrinth which was to imprison the Minotaur son of the kings wife Pasiphae.

When King Minos discovered that it was Daedalus who had helped assist his wife in her infidelity he decided to punish him. In the meantime the king made sure that there were watchman on every ship to make sure that Daedalus couldn't escape. Daedalus was then locked in a tower with his son Icarus so that he wouldn't be able to share his knowledge of the labyrinth with the public so that the Minotaur could be kept hidden forever.

Knowing that he would be unable to escape by either land or sea he concentrated all his mental power and energy on finding an alternative way to escape Crete. He eventually came up with the idea of flying by imitating the fight of birds. So he went about making two sets of wings for him and his son using wax and string to glue the feathers together. When they were ready to set off for their great escape Daedalus warned his son not to go too high as the sun would melt the wax nor too low as the sea foam would soak the feathers.

The wings worked and both father and son soared above the seas far above Crete and well on their way to a fresh start elsewhere, yet as Icarus grew bold and proud of his achievement he flew so high that the sun melted his wax wings, this sent him hurtling into the sea where he drowned. Daedalus was inconsolable and regretted what he had created and in remembrance of his son named the Ocean the Icarian as it is still known today.

Daedalus carried on on his journey where he eventually landed in Sicily, where he spent the rest of his life and continued using his creative gift to build a host of architectural wonders.

It is said that the story of Daedalus and Icarus was made to remind us of the consequences of inventions in-case we end up doing more harm than good.

Hopefully after reading this you will have a greater appreciation of the narrative and enjoy what is a great song from my favourite band!

Listen to the song Daedalus by Thrice -