On the Origin of Mitochondria: Reasons for Skepticism on the Endosymbiotic Story 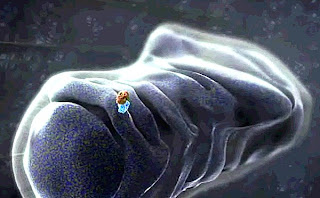 I was saddened to learn of the recent passing of biologist Lynn Margulis. Margulis, a scientist whom I admired greatly, was never a stranger to controversy, going so far as to call neo-Darwinism "a complete funk" and asserting that "The critics, including the creationist critics, are right about their criticism. It's just that they've got nothing to offer by intelligent design or 'God did it.' They have no alternatives that are scientific." She was a scientist who wasn't afraid to think creatively, disregarding the scorn of her colleagues. According to the Telegraph, a response to one grant application she made said: "Your research is crap. Don't ever bother to apply again."

Lynn Margulis took a controversial view on how evolution works, stressing the importance of symbiotic and co-operative relationships over competition. This concept of evolution inspired what is now recognized as her most notable idea, the notion that the eukaryotic mitochondrion -- the power plant of the cell -- was acquired by virtue of an endosymbiotic event. Endosymbiotic theory essentially maintains that mitochondria arose by virtue of a symbiotic union of prokaryote cells. The nearest living relative to the mitochondrion is thought to be the alpha-proteobacteria Rickettsia (Emelyanov, 2000; Andersson et al., 1998). Chloroplasts are also thought to have arisen in a similar manner from the photosynthetic cyanobacteria.

In November 2010, I drew attention to a paper in Nature by Nick Lane and Bill Martin, who showed that the prokaryote-to-eukaryote transition was effectively impossible without the energy demands, pertinent to the biggest event of gene manufacture in the history of life on earth, being met by the mitochondrial processes of oxidative phosphorylation and the electron transport chain. The bacterial cell alone could not meet these energy demands.

The evidence that is typically offered for endosymbiotic theory includes the following:

In the case of linear chromosomes, the DNA polymerase enzymes are unable to replicate right to the end of the chromosome. This is because the enzymes are unable to replace the lagging strand's terminal RNA primer. Unless there is a mechanism for circumventing this, it will result in the chromosomes shortening after each round of replication (in eukaryotes, the enzyme telomerase attaches extra DNA to the chromosomal ends). This means that the transition from genome circularity to linearity -- a fete in itself given the changes that have to be made to the mode of replication -- must happen in concert with the evolution of a mechanism to prevent progressive chromosomal shortening. Such an evolutionary transition is far from trivial. Biologist Albert de Roos writes,

"[I]n linear mitochondrial chromosomes various different mechanisms to "prevent" shortening exist, ranging from hairpin loops and self-priming to protein-assisted primer synthesis (see here). The telomeric regions of mitochondrial chromosomes do not seem to have a direct phylogenetic relation since they use other proteins and mechanisms than nuclear telomeres. Thus, it is difficult to deduce evolutionary pathways purely based on phylogenetic data on telomeres and mechanisms for end replication."

Furthermore, mitochondrial genes often do possess introns (Lang et al., 2007). These are particularly prevalent in the mtDNA of fungi and plants. The mitochondrial genetic code may also be slightly different from that of bacteria (Jukes and Osawa, 1990).

The claim one often hears is that circular mitochondrial DNA replication resembles bacterial binary fission. While this is true, in at least some respects, there are also important differences. For example, many of the key components are of eukaryotic origin and replication beginning at the Displacement (D-) loop (Fish et al., 2004; Clayton, 1996) is not the same as bacterial DNA replication.

It is frequently asserted that the double membrane of mitochondria provides evidence for its endosymbiotic origin. There are, however, important differences between bacterial and mitochondrial membranes. Albert de Roos observes,

"The bacterial membrane is one of the basic characteristics that distinguish bacteria from eukaryotes, see some examples here. In order for mitochondria to resemble bacterial membranes, they should share characteristics such as a cell wall with peptidoglycan and lipopolysaccharides, gram-staining and antibiotic sensitivity. Some effects of antibiotics have been seen with both bacteria and mitochondria, but the effect is minor while the use of antibiotics is based on the principle that they distinguish between bacteria and eukarytes, including the mitochondrion (here). Until then, the selection of a few apparent similarities while ignoring the many differences does not indicate a bacterial origin for mitochondria. On the contrary, the fact that their membranes are so different as well as the fact that nearly all genes are encoded by the nucleus is primarily evidence against a bacterial origin.

Even though some shared characteristics may be found, we have to realize that bacterial and eukaryotic membranes are fundamentally different. It seems virtually impossible to change all fundamental bacterial membrane characteristics and replace them with a eukaryotic counterpart without loosing membrane integrity. The differences between the membranes of mitochondria and the cell walls of bacteria make the endosymbiotic theory mechanistically difficult. It seems quite clear that bacterial membranes do not change easily into other membranes, and frankly I don't see any scenarios in which to change all these membrane components without drastically affecting fitness."

The Size and Shape of Mitochondria

The argument based on the size and shape of mitochondria is one that has been turned on its head in recent years, being transformed from an argument for endosymbiosis to one against it. These organelles are now acknowledged in the literature to be better understood as dynamic reticular structures (see this link for references).

Electron micrographs displaying cross-sections of mitochondria portrayed the mitochondrion as a sphere. However, when one looks at 3D models of the organelle, the reality is somewhat different. You can take a look at some of these images by going here, here, here, or here.

The Lack of a Mechanism

By far the most potent challenge to the endosymbiotic origin of eukaryotic mitochondria is the lack of a viable mechanism, perhaps most particularly with respect to the transfer of genes from the mitochondrion to the nucleus.

For one thing, there are the variants on the conventional genetic code. This means that, over the course of their transfer to the nucleus, the genes would need to be "recoded" so as to comply with the conventional genetic code. For example, recognizing UGA as a stop codon instead of the codon for Tryptophan (or vice versa) would cause cellular mayhem.

Secondly, mitochondrial proteins made at the ribosomes in the eukaryote cytoplasm need to be identified as such to ensure that they are properly dispatched (this is normally done by attaching a "label" in the form of an extra length of polypeptide to the protein). This would require a coincidental modification of the correct structural gene (which seems unlikely). Biologist Timothy G. Standish notes,

"All evolutionary theories must offer an explanation in mechanistic terms of how it should or could have happened in order to be tested. The difficult thing with the endosymbiotic theory is that it proposes no real mechanism and most textbooks show the simplistic picture of a cell that swallows another cell that becomes a mitochondrion. Unfortunately, it is not so simple as that. There is a difference between the process of endosymbiosis and its incorporation in the germline, necessitating genetic changes. What were those changes? What was the host? Was it a fusion, was it engulfment, how did the mitochondrion get its second membrane, how did two genomes in one cell integrate and coordinate? The theory is also strongly teleological, illustrated by the widely used term 'enslavement'. But how do you enslave another cell, how do you replace its proteins and genes without affecting existing functions? The existence of obligate bacterial endosymbionts in some present eukaryotes is often presented as a substitute for a mechanism, but they remain bacteria and give not rise to new organelles. So, before we can speak of the endosymbiotic as a testable scientific theory, we need a mechanistic scenario which is lacking at the moment.

When we do try to envision a mechanistic scenario based on the endosymbiotic theory, we quickly run into problems. Genetic mutations that allow bacteria to thrive in the cytoplasm would not be strategic for survival. Anaerobic cells normally do not survive in environment that contains oxygen, while the endosymbiont would need oxygen in order to present fitness advantage. The two organisms would initially compete for energy sources since bacteria are users of ATP and do not export it. The extensive gene transfer that is needed in the endosymbiotic theory would wreak havoc in a complex genome since frequent insertion of random pieces of mitochondrial DNA would disrupt existing functions. Furthermore, gene transfer is a multi-step process were genes need to be moved to the nucleus, the different genetic code of mitochondria needs to be circumvented, the genes need to be expressed correctly, as well as imported back into the mitochondria in order to be functional. All in all, mechanistic scenarios for the endosymbiotic theory imply many non-functional intermediates or would just be plain harmful to an organism. Therefore, the endosymbiotic theory is in contrast with the concept of gradualism that forms the basis of modern evolutionary theory."

Furthermore, this gene transfer must have taken place at a time extremely early in the history of eukaryotes, substantially reducing the window of time in which gene transfer could have occurred.

While we find examples of similarity between eukaryotic mitochondria and bacterial cells, other cases also reveal stark differences. In addition, the sheer lack of a mechanistic basis for mitochondrial endosymbiotic assimilation ought to -- at the very least -- give us reason for caution and the expectation of some fairly spectacular evidence for the claim being made. At present, however, such evidence does not exist -- and justifiably gives one cause for skepticism.

This article was originally published on Evolution News & Views.

Posted by Jonathan McLatchie at 05:31