Lost Scriptures of the New Testament? 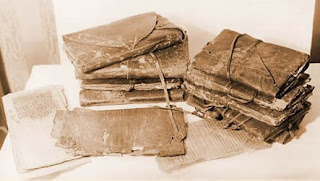 In a previous blog, I discussed the textual integrity of the documents which comprise the new testament, and addressed the often-raised claim that the new testament has been substantially edited over the intervening centuries with doctrines being added and removed at the church’s will. As I argued in my previous blog, such ill-informed assertion is pure fantasy.

Another ill-conceived claim which I receive often is the assertion that the twenty-seven books which now constitute the new testament were chosen, more or less, arbitrarily. That is to say, there were dozens of other claimant documents floating around in the early centuries and the church cherry-picked those which best suited their own interests and purposes. While it is certainly true that the canonical documents were by no means the only documents circulating in the early life of the church, the view that the books were chosen arbitrarily or ‘cherry picked’ is, again, simply fanciful.

Indeed, the canonicity of various books was heatedly debated in the second, third and fourth centuries. But this was by no means arbitrary. Most of the rejected books have a very clear influence from second-century Gnosticism. For a thorough discussion of the formation of the canon, I refer readers to Brian H. Edward’s book, Why 27? – How can we be sure that we have the right books in the New Testament? I recently took the time to watch a BBC documentary on The Lost Gospels (which you can view here). People can read these “lost books” at their leisure. For a fairly comprehensive compilation of such books, I refer readers to Bart Ehrman’s book, Lost Scriptures — Books That Did Not Make It Into The New Testament, which features much of the material which appears in the documentary.

The BBC’s documentary, sadly, was misleading on several counts. The ‘gospel’ of Thomas, for example, reeks of second century Gnosticism. It cannot have been a first century document (as claimed by the documentary). What, are we to expect the early church to accept every book into the Canon, regardless of their view of its genuineness or date?

It is my own view that close to all of the canon was generally regarded as inspired Scripture before the close of the second century. Even many of the writers of the new testament clearly regarded other books as sacred Scripture. 2 Peter 3:16, for example, reveals Peter’s attitude to the letters of Paul, which he regards as equivalent to “the other Scriptures”. Similarly, 1 Timothy 5:18 quotes from the gospel of Luke and equates it with the authority of the Pentateuch, describing both as “Scripture.”

Moreover, Polycarp (A.D. 69-155) wrote a letter to the Philippians, quoting Ephesians 4:26: “For I trust that you are well versed in the Sacred Scriptures, and that nothing is hid from you…It is declared then in the Scriptures, ‘Be ye angry, and sin not,’ and, ‘Let not the sun go down before your wrath.’”

Polycarp also refers to the ‘oracles’ of the Lord, using precisely the word that Paul had used to refer to the Hebrew Scripture in Romans 3:2, quoting 1 John: “‘For whosoever does not confess that Jesus Christ has come in the flesh, is antichrist’; and whoever does not confess the testimony of the cross, is of the devil; and whosoever perverts the oracles of the Lord to his own lusts, and says that there is neither a resurrection nor judgment, he is the first-born of Satan.”

Clement of Rome, writing towards the end of the first century (~96 A.D.) clearly regarded Paul's first epistle to the Corinthians as divinely inspired:


"Read your letter from the blessed Apostle Paul again. What did he write to you in those early Gospel days? How truly the things he said about himself and Cephas and Apollos were inspired by the Spirit! -- for even at that time you had been setting up favourites of your own. Such partiality was perhaps less culpable in those days, for two of the men you favoured were Apostles of the highest repute, and the third was one to whom they had themselves given approval. But think of the persons who have seduced you now! They have lessened all respect for that much-vaunted fraternal affection of yours. It is shameful, my dear friends, shameful in the extreme, and quite unworthy of the Christian training you have had, that the loyal and ancient church of Corinth, because of one or two individuals, should now be reputed to be at odds with its clergy. Even those who do not share our faith have heard this report, as well as ourselves; so that your thoughtlessness has brought the name of the Lord into disrespect, to say nothing of imperilling your own souls." [emphasis added]


2nd Clement also quotes from Isaiah and follows it by, “And another scripture says, ‘I came not to call the righteous, but sinners’”, which is taken from Mark 2:17 or Luke 5:32.

There is evidence of all the New Testament books being used early in the second century, though there is no evidence of a definitive list until the middle of that century. The early Christian leaders clearly took the NT gospels and epistles to be divinely inspired and thus authoritative — this is evident because they refer to them as the four gospels and letters of the apostles, and often quote from them.

Consider, for example, Ignatius’ (A.D. 35-108) letter to the Philadelphian church, in which he wrote: “While I flee to the Gospel as to the flesh of Jesus Christ, and to the apostles as the presbytery of the Church. I do also love the prophets as those who announced Christ, and as being partakers of the same Spirit with the apostles…The prophets and the apostles receive from God, through Jesus Christ, one and the same Holy Spirit, who is good, and sovereign, and true, and the Author of [saving] knowledge. For there is one God of the Old and New Testament.”

This reference to the ‘New Testament’ is certainly suggestive of the presence of a growing collection of literature considered to be divinely inspired.

Ignatius also wrote to the Christians at Smyrna: “…but we should give heed to the Prophets, and especially to the Gospel, wherein the passion is shown unto us and the resurrection is accomplished.” Granted, Ignatius does not name the ‘Gospels’ and the ‘Apostles’, he clearly possessed copies that would be recognised as such. He also wrote to the Magnesians, “Do your diligence therefore that you be confirmed in the ordinances of the Lord and of the Apostles.” This is clearly a reference to known writings of the gospels and the apostles.

Tertullian (A.D. 160-220) also speaks of “The Law and the Prophets, with the Gospels and the Apostles.” Clement of Alexandria makes a similar distinction.

I think this offers a substantive cumulative case for supposing that a developing canon of the new testament was accepted long before a list of recognised books was drawn up by the author of the Muratorian Canon (around 150AD) or by Eusebius almost two centuries later.

Moreover, Athanasius’ (A.D. 296 - 373) denunciation of the Shepherd of Hermas as “not belonging to the canon” presupposes that there was a clear idea of a canon before then.

The church historian, Eusebius (A.D. 263 - 339) also describes the way the apostles left the church a written record of their gospel: “For Matthew, who had at first preached to the Hebrews, when he was about to go to other peoples, committed his Gospel to writing in his native tongue, and thus compensated those whom he was obliged to leave for the loss of his presence. And when Mark and Luke had already published their Gospels, they say that John, who had employed all his time in proclaiming the Gospel orally, finally proceeded to write for the following reason: The three Gospels already mentioned having come into the hands of all and into his own too, they say that he accepted them and bore witness to their truthfulness; but that there was lacking in them an account of the deeds done by Christ at the beginning of his ministry.”

When the heretics in the late second and early third centuries started to remove from the canon books which did not meet their fancy, the church leaders vigorously opposed them — Why, if the canon was still up for grabs?

The bottom line is that the books which appear in our canon are the only surviving books, of relevance, from the first century AD. All of the books which later came to be rejected, such as those discovered at the Nag Hammadi Library, can be soundly placed in the centuries which followed, and are clearly influenced by second and third century gnosticism. These gnostic books are quite markedly different from the authentic first-century documents, in their substance and content. Even those that claim to be ‘gospels’ are not gospels in the way we understand the word, since they contain almost no history. For the most part we possess only fragments or badly damaged copies, since they were never accepted by the church generally and thus became lost when the Gnostics died out by the sixth century.

In summary, the evidence is that the churches from the very earliest times were gathering the books of the New Testament, but there is no evidence that other writings were so eagerly accepted. Indeed, from 180 onwards the four Gospels, Acts and thirteen letters of Paul were accepted without question across the empire. No other gospels were ever considered. While it is not until the Council of Carthage (AD 397) that we find an officially sanctioned list, that list had been generally assumed for more than two hundred years!
Posted by Jonathan McLatchie at 01:24