When Were The Gospels Written? 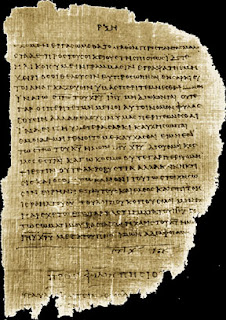 When were the gospel biographical accounts of Jesus written? One popular claim by skeptics is that the gospels were written so long after the events which they narrate that their historical and biographical value is suspect. While virtually all scholars maintain that all of the gospels were written in the first century, within liberal scholarship it is conventionally thought that all four gospels were written post-70AD. It is my own view, however, that this proposition is largely arbitrary, and based largely on a false presumption that a prediction, on the part of Jesus regarding the destruction of the temple in AD70, must have been composed after-the-fact. If, however, one takes seriously the proposition that prophecy by a divine figure is possible, then the justification for the post-70AD dating largely disappears.

I am going to propose something radical — namely, that all of the synoptic gospels (that is, Matthew, Mark and Luke) pre-date AD60 and perhaps even AD50, thus being removed from the passion events (33AD) by possibly less than 20 years, with the underlying source material behind the gospels dating back even further still. Moreover, I am going to argue that we possess at least two sources from the 30s AD, being removed from the passion events by only two or three years!

When compared to other ancient biographies, these sources are very early indeed. Sources for Roman and Greek history are usually biased and removed one or two generations (or, in some cases, even centuries) from the events that they detail. The two earliest biographies of Alexander the Great, for example, were penned by Arrian and Plutarch more than 400 years following his death. But classical historians still regard them as being trustworthy. The legends which concern Alexander the Great didn’t develop until centuries after those two writers. A.N. Sherwin-White argues in his book, Roman Society and Roman Law in the New Testament that “Herodotus enables us to test the tempo of myth-making, and the tests suggest that even two generations are too short a span to allow the mythical tendency to prevail over the hard historic core of the oral tradition.” Sherwin-white further argues that, for the gospels to be legends, the rate of legendary accumulation would have to be “unbelievable”.

So, what about the dating of the gospels? It is generally agreed among scholars that Mark was written first, and Matthew and Luke subsequently utilised Mark’s gospel as source material, and then John was written last (and independently). Luke is likely to have been the latest of the synoptics. But Luke is quoted elsewhere in the New Testament, by Paul. Paul writes in 1 Timothy 5:18, “For Scripture says, ‘Do not muzzle an ox while it is treading out the grain,’ and ‘The worker deserves his wages.’” This latter citation is from Luke 10:7. Clearly, then, Luke (or, at the very least, the source material upon which Luke is based) must pre-date the writing of 1 Timothy (we’ll come to the dating of 1 Timothy shortly). The appeal to the quoted text as coming from “Scripture” would also seem to militate against a possible objection that the quoted phrase was a popular cliche which was independently quoted by Luke and Paul.

Paul also quotes from Luke’s gospel, in connection with the Lord’s supper, in 1 Corinthians 11:

“For I received from the Lord what I also passed on to you: The Lord Jesus, on the night he was betrayed, took bread, and when he had given thanks, he broke it and said, ‘This is my body, which is for you; do this in remembrance of me.’ In the same way, after supper he took the cup, saying, ‘This cup is the new covenant in my blood; do this, whenever you drink it, in remembrance of me.’ For whenever you eat this bread and drink this cup, you proclaim the Lord’s death until he comes.”

In addition, 1 Timothy 6 also makes reference to Pontius Pilate, suggesting that its author (in my view, Paul) was aware of the circumstances surrounding Jesus’ trial. Paul is also evidently aware of the 12 disciples (e.g. 1 Corinthians 15).

So, what then can we conclude? If – as I maintain – the pastoral epistles are genuinely Pauline, then Luke’s gospel (or, at the very least, Luke’s source material) must predate AD60 by far enough to be regarded as Scripture at the time of the writing of 1 Timothy (probably the early 60s). Furthermore, I would argue, it is likely to also predate the writing of 1 Corinthians in the early 50’s.

This is also consistent with evidence from other areas. For example, the Acts of the Apostles (which post-dates Luke’s gospel) does not mention the destruction of the temple in AD 70, nor the death of Peter or Paul, nor for that matter the persecution of Christian martyrs under Nero in the 60s or the Great Fire of Rome from which it resulted. If such events had already taken place by the time Luke wrote Acts, one would expect to find a pertaining description. But, instead, Acts leaves us hanging, by ending after Paul has been placed under house-arrest.

The testimony of the early church is as strong for the Pastoral Epistles as for any of Paul’s writings except for Romans and 1 Corinthians. Common arguments against Pauline authorship, however, are as follows:

Regarding (1), this objection is valid only if Paul was never released from his Roman imprisonment mentioned in Acts. But he was released, since Acts doesn’t record his execution and Paul also anticipates his release (see Philippians 1:19,25,26 and 2:24). (2) is fairly weak because, unlike second century Gnosticism, the false teachers described were still within the church and their teaching was based on Judaistic legalism. (3) is extremely weak because the church organisational structure described in the pastoral epistles is also mentioned in Acts 14:23 and in Philippians 1:1. As for (4), this objection is weak since the pastoral epistles are addressing a different subject matter.

Besides the testimony of the early church fathers, positive reasons for thinking that the pastoral epistles belong to Paul include the counter-productivity of 1 Tim 1:13 (“…although I was formerly a blasphemer, a persecutor and an insolent man…”) and the fact that 2 Timothy 3:13 and Titus 1:10 warns against deceivers, whilst none of them include any deviant doctrine. Also, Paul quotes a verse (1 Timothy 5:18) which he has also quoted elsewhere (1 Corinthians 9:9).

But there is also, in my opinion, a very strong argument for supposing that 1 Timothy can be taken as having been written before AD68. Among the fragments that have been found from 1947 and following in the Qumran caves around the Dead Sea, are some fragments which appear to be from 1 Timothy 3:16 and 4:1-3 (fragment 7Q4). The strength of 7Q4 on those verses in Timothy is that it contains the end of five consecutive lines, which makes it far easier to identify! The odds against this not being 1 Timothy are astronomical.

But are there any fragments of the gospels which feature in the Qumran caves? A world-leading Papyrologist, Jose O’Callaghan, has identified Qumran fragment 7Q5 as a segment from the gospel of Mark. Written in Greek (as opposed to Aramaic) and on papyrus (as opposed to parchment), the fragment formed part of a scroll (not a codex) since the writing was only present on one side of the papyrus. The fragment contained only 19 letters.

O’Callaghan studied four of those letters: n n e s, and concluded that they must be part of the word Gennesaret. This could have come from 1 Maccabees 11:67, but the context wouldn’t fit that verse. He then looked at the same word in the gospel of Mark, and he found that the entire fragment fitted neatly into the space required for Mark 6:52-53. There was even a blank space at the end of verse 52, which was a typical means of indicating a break in the text.

Of course, one must bear in mind that the source material for the four gospels, including Q, M & L (Matthew and Luke’s special sources respectively), and Mark’s passion narrative, must date back even further still. Then there is the creed quoted by Paul in 1 Corinthians 15 (which mentions Jesus’ death, burial, resurrection and post-resurrection appearances) which likely dates to within the first three years of the Christian movement. We also have the Carmen Christi, quoted by Paul in Philippians 2, which likely dates to the first decade of the church (which reveals a very high Christology — revering Christ as being “in very nature God” — and mentions Jesus’ death by crucifixion).

One could go on. But I think that I have presented a compelling cumulative argument for dating the gospels earlier than the dating often supposed (which is largely determined on the basis of a suppositional predisposition against the possibility of prophecy concerning the events which would befall Jerusalem in AD70).